Semi-Sensei, Thinking About the Trip as a Whole 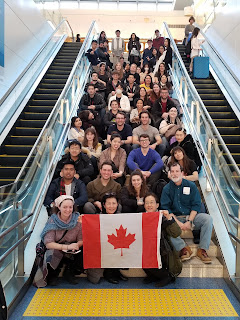 Once again, I learned the kids are alright.  Lots of folks complain about the next generation, but I
found them to be sharp, sweet, engaging, fun, dynamic, engaged, and excellent roadtrip partners.  They picked up on the fact that they were essentially tools of an information operations campaign (see below).  They noticed key omissions in the various presentations as well.  I got to hang out with mostly MA students from Carleton, U of Ottawa, and U of Toronto over the course of the week, dragging a bunch of them to the best french toast in the world, and I got to see them become pseudo-family members with rural Japanese families.   Best part of the trip.

Once again, as well, I learned that the Japanese people I spent time with were generous and fun.  I got to hang out with a friend from previous trips as well as with the guides.  These folks were also sweet and fun and, well, tolerant of this westerner.  I learned much from the various conversations.

I learned that I am getting old.  I think I paid a higher price for jet lag, especially upon return to Canada, than previous trips.  I was able to keep up with the kids during the days, but, well, not during the nights.  I was not quite as eager to explore before breakfast or after dinner, although I managed from time to time.

The resilience of the Japanese cannot be underestimated. Our homestays were in Tome, near the part of the country that was devastated in March 2011 by the tsunami.  Little evidence remains besides yellow grass and one (at least as far as I know) memorial/museum.  I didn't get a chance to visit it, but several of the students did.  Their pictures and stories were most moving.

As always, Japan has style.  Everywhere we went, we found beautiful gardens, shrines, restaurants, dishes of food, etc.  I had never gone north before, and the train ride was terrific  I regret, once again, not having time to ski.  I really enjoyed walking around Matsushima, as the locals had built shrines and bridges that complimented nicely the islands and the bay.

The Japanese do public diplomacy very, very well.  The students and host families were handpicked.  The students at Tohoku University were excellent ambassadors.  We had great guides and mostly got to see the key spots (some Canadian-imposed restrictions in the age of plague cut down on some of the stuff we could see as a group--the students found most of that stuff independently).   The students were required to post on social media their experiences, and the groups had to come up with action plans for sharing what they learned.  I will write another day about being a tool of an information operation, but for now, let me just say that it was a pleasure.

One of the key moments during the trip was an early briefing by a Japanese academic about the state of play--politics, history, culture.  It was a lot in a short time, and much was sped through or overlooked, but as hinted above, the students noticed some key elements.  The aging of Japanese society is a major challenge, and the policy tools being applied are, well, limited.  More day care and other benefits to encourage more babies, but that seems to be as ineffective here as elsewhere.  And, no, no mention of immigration as a solution.  The students picked up on that.

I learned that the 1940 Olympic games were supposed to be in Tokyo but were cancelled.  The other games in Japan, especially 1964, meant a great deal for Japan's sense of self.  So, I worry about what the coronavirus might do to this summer's games.

Yeah, it was strange to be called sensei, but, yes, I loved it.  Almost as good as the french toast at Hoshinos (next time, I will watch the Shibuya scramble intersection from their well-placed location).  Not sure they really needed a chaperone, except to fill out a bit of time at the Canadian embassy and to keep Air Canada from shutting the gate on the way home in Toronto.

It is hard to believe that I had no Japan experience until 2016, and this was my fifth trip sense then.  The place is very addictive, and I can't wait to come back and see more of the country.

Posted by Steve Saideman at 6:18 AM