Burning Down A Place But Not The Memories 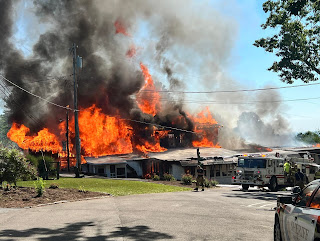 This past week, the main building at Camp Airy burned down.
The good news: no one was hurt, it was the only building that was harmed, and the camp season is continuing.  Every start of every summer, the camp director would tell everyone not to let any of the faucets keep dripping after they are done with the sinks because it would empty the water tower.  Well, it turns out that was not mere rhetoric, as they had to bring up water from the pool and the pond.  There are temp facilities being set up, and a variety of entities have lent a hand so that the kids, counselors, and staff can eat. So, the summer and the camp will go on.

I spent the best ten summers of my life there, first as a camper and then as a counselor.  Every year, I spent 44 weeks looking forward to the eight.  I felt far more alive and myself at that place than at my middle school or high school.  The White House--the building that burned down--was mainly the dining hall, but also held offices and the counselor's evening clubhouse.

What do I remember about that dining hall?

The news of the fire has brought together much of the old gang, telling stories.  It breaks my heart that the building burned, but I find solace in those stories and in the news of the help that is being sent up the mountain.  I am glad that these boys (and the girls down the road at Camp Louise) will keep doing this special camp thing.

Posted by Steve Saideman at 3:26 PM