I spent many Saturdays over the course of the pandemic charting my descent into quarantine madness, yet when I got COVID, I didn't feel any urgency to post about my experience.  Maybe COVID sucked out my blogging enthusiasm?  It was both good and bad timing--bad because I had some fun stuff lined up but good because I got it out of the way before Beulah-fest and Steve-fest but bad because boosters just became available as my covid case ended and now I have to wait three months to get a booster, but good perhaps because the next boosters might be better?

So, how did I get COVID?  By conferencing.  I went to the European Initiative on Security Studies conference in Berlin at the end of June/beginning of July.  It was both a good networking opportunity to build more bridges between the EISS and the CDSN and a chance to learn what the sharp folks are studying these days.  I wasn't presenting--I served as an overly talkative discussant for a civil-military relations pane.  Was this conference worth getting COVID?  Since Mrs. Spew and I both had very mild cases--sore threats, headaches--for about a week, I would have to say it probably was.  Why?

I had symptoms the day after I returned, and after three days of negative tests, I got a positive antigen test.  So, we hid out and progressively ran out of stuff.  The dechero of May had depleted our frozen food stock, so my freezer was not as full as usual.  I had planned on going shopping right after the Berlin trip to fill our cupboards and frig and freezer and, well, covid happened.  Still, we were able to hide out after canceling plans and got through it ok.  I managed to get some work done, but also felt far less guilty about taking a day off and then not getting much done on other days.

We recovered after about ten days.  I kept in mind that (a) while the health authorities said 5 days after symptoms, one could start doing stuff, that probably was built on earlier variants--the more recent variants seem to last longer and (b) any notion of the average case being contagious for x days needs to keep in mind that "average" means half before and half after.  So, we stayed at home for the full ten days and then only went out masked for the necessary stuff--shopping.

We recovered and were no longer contagious by the time we drove to Philly to celebrate my mother's 90th birthday (which was earlier in the year, but this was the best time for max Saideman turnout).  I got to see Hollywood Production Assistant Spew for the first time since winterfest as well as my nieces, nephew, mother, brother, and sisters and brother-in-law, cousins and even a cousin's sweet dog.  We had a very nice dinner with/for my mother.  She wore a tiara and everything!

We have been hitting Philly hard the past few years as it is hard for my mother to travel--the summer vacation has been there since my father died.  We had one day at the shore--Asbury Park for the first time, no Bruce sightings.  A couple of good steak sandwichs, great bagels (I recoil in disgust when I pass by a Montreal bagel place on South Street) and lox, and a very good brew pub for my own Steve-fest.

Oh and I impressed by making Dutch babies with caramel apple sauce for the first breakfast of the week: 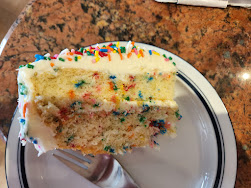 My sister made birthday cake for me, and, yes, I asked for funfetti! 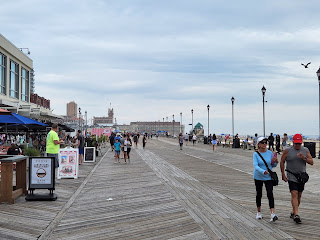 A day at the shore, with Asbury Park having a pretty sweet boardwalk. The water was cold, but that didn't stop me from jumping in/over/under the waves.  I missed the next generation as it was always fun to dunk them, toss them, and hang with them in the water.

I embraced my inner Rocky as I did grew up in Philly at the time of the first three or so movies:

Save the clock tower!  Ok, my annual Mrs. Spew and I in front of Independence Hall.  I found it quite appropriate that the building is askew at a time where the institutions (SCOTUS) are broken. 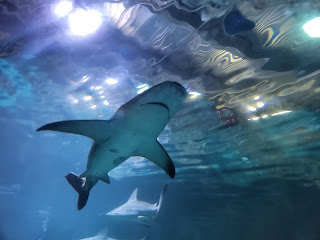 We went to the Camden Aquarium as my daughter has a friend getting married there sometime in the next year or two.  We got to pet sharks and rays, saw two hippos, and got to see Philly from the other side. 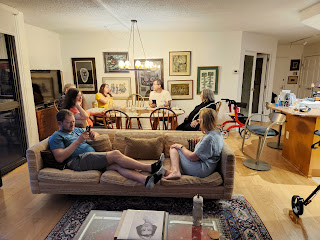 With the heat and with us having done so much tourism in the city before, we did a lot of hanging out.

Despite the COVID kickoff, Stevefest has been a good one.  Tomorrow, I play ultimate for the first time in more than a month, and, yeah, one of the last times...  but more on that later.

Posted by Steve Saideman at 5:49 PM