Ask The Reader: Who is the Fourth Horse-person of the Apocalypse?

Ok, we have three obvious candidates for those who promise doom--both in their rhetoric and their impact: Dick Cheney, Rush Limbaugh and Sarah Palin. Each has engaged in some fear-mongering---threatening doom; and each has done their best to create a marginalized Republican Party--which is probably a bad thing in the long term. So, I need help figuring out who is the fourth, because trilogies work best for movies, but the end of days, we need four.

Dick Cheney is getting far more attention than he deserves, having helped sail the ship of state into the rocks. He 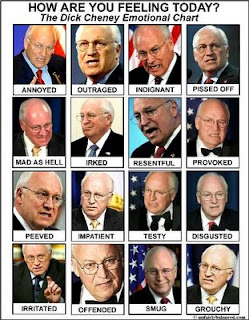 has been in the media far more often the past couple of months than in his entire reign of error/terror. People still wonder what happened to the potentially corrupt but still semi-solid "adult" from the first Bush Administration, with recent reports focusing on how 9/11 unhinged the man. Regardless, his hands are all over the worst mistakes made by the Bush Administration, including preventing experts from the State Department taking part in the first stages of the Occupation in Iraq; the torture memos; and the expansion of executive power. But the media loves a fight, so they are giving him far more attention than he deserves, as he makes false claims and panders to the worst fears. As much as Saturday Night Live mocked G.W. Bush with the classic skit with "John McCain" doing his best not to appear with Will Ferrell's Bush, I would think that most Republican candidates would not want to be in the same picture as Cheney either. Yes, his numbers have bounced up a bit, but so has Bush's--people can get nostalgic once their hands are off the switch. Cheney is not winning too many converts these days, but his efforts to kick Colin Powell out of the party only helps make the GOP the party of a very right wing and no one else. 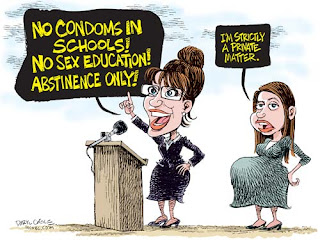 andidate. Given her statements during the campaign about real America and her background, I think she seems mighty comfortable winning the votes of white rural America. And I am ok with that in the near and medium term, because that is a losing strategy. Not too long ago, the Republicans owned the suburbs, where many of the votes are,* but not so much now. She can talk about pal-ing around with terrorists all she wants, but if her hubby was/is really a member of the Alaskan separatist party, then she is sleeping with a traitor. And her family values campaign is laughable, given the record of her own family. Is this really the best the Republicans can do? Who else could McCain have considered?

And then there is Rush Limbaugh. Don't really 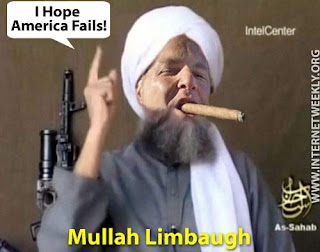 need to say much that Al Franken and Wandka Sykes have not covered. The hypocrisy is stunning, the mean-spiritedness is amazing, and he seems to have more power over the GOP than before. Which means that the Republicans are bereft of ideas and of balls. Ridge and Powell seem to be exceptions, pushing back a bit. Everyone else who has thought about rebelling against Rush's reign has retreated. It will be interesting to if this new rebellion endures and gains followers.

I don't see how the Republicans can hope to win the median voter. Sure, they can do well in Lubbock and other highly conservative districts, but they are losing states and the electoral map that seemed so favorable under Reagan now is stacked against them.

While Democrats can cheer about their good fortunes (and must be careful that they don't engage in their habit to snatch defeat from the jaws of victory), we have to wonder just a bit about how unhealthy this is for American Democracy. The two party system is not going to go away (see an interesting post at our favorite poli-stats site), but accountability requires competition. In the short run, it would be nice of Obama could rule reasonably without restraint, but the Dems can abuse their majority as they have in the past, and competition is the best cure for corruption. So, given the eight dark years, we can cheer that the party of negative nabobs are on the outs, but we need these guys if they return to becoming the voice of reasonable expenditures, rational taxes, and restrained realpolitik. But if they remain captured by creation scientists, anti-government ideologues, and neo-con arrogance, then they belong in the margins in which they will dwell.

So, who is the fourth horse-person?


* Not to mention the cities, which have been in the Democratic column and now have an urbanite as President.
Posted by Steve Saideman at 10:02 PM

Email ThisBlogThis!Share to TwitterShare to FacebookShare to Pinterest
Labels: Cheney, Palin, US politics

Richard Perle would be too easy so I would nominate Bill Kristol. More than Gingrich, Rove,etc. Kristol has been highly influential at crafting strategy, writing the spin and recruiting "talent" like Palin.