Something Old, Something New: Shifting Defense $$

Secretary of Defense Robert Gates is attempting cut and shift some of the hundreds of billions of $$ the US spends on defense, and is, unsurprisingly, running into some opposition. Neither the effort nor the obstacles should be much of a surprise. The wars of this decade have revealed, once again, that the US prepares for the wars it wants to fight, not so muc

h the wars it is going to fight, to paraphrase the worst Secretary of Defense in US history (that would be Rumsfeld). Gates wants more spending on unmanned aerial vehicles (UAVs) that can loiter over the battlefield, and less on super-advanced fighter planes that cost hundreds of millions of dollars per plane. He would like to spend less on the planned next generation of army vehicles and more on those that can resist roadside bombs (improvised explosive devices---IEDs).

To be fair, these are not so simple tradeoffs. The US is fighting insurgents because its opponents cannot fight and win a conventional war. The US supremacy on the conventional battlefield does deter opponents and is worth continued investment. So, opponents have to avoid American strengths and fight guerrilla wars.

This guns vs guns debate is complicated by a couple of other dynamics. One of the big lessons learned during my year in the Pentagon was that there is a fetish for having the very, very best equipment. At the time, Rumsfeld sought to cancel the Crusader artillery system--perhaps one of the few good decisions he made. Well, most of the Army guys in my office on the Joint Staff had backgrounds in Artillery since their planning 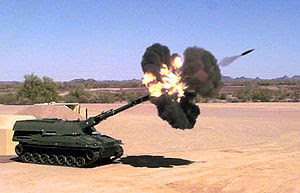 expertise/experience worked well for serving in the Directorate of Strategic Planning and Policy (J-5). So, I engaged these officers in discussions about the Crusader debate. The more senior officers argued, almost convincingly, that in battle you want to have the most capable weapon system possible. That any additional feature that had some added value in war was extremely desirable. But the problem is that it cost $25 millions a gun, five times as much as the reasonably similar German arty system and 3 times as much as the British system. So, there is often a real quality vs quantity debate. The desire to have absolutely the best means having a smaller number. This has significantly limited how many fighter planes the US has.

The second dynamic is the resistance of the defense contractors, who often fight through a variety of strategies to maintain their systems and their profits, including the famous example of the B-1 bomber. It had components built in nearly every state and in over 400 congressional districts--that is an outcome produced not by a desire for optimal production but for the political survival of a contentious project (Ironically, the B-1 is now better suited, thanks to smart weapons systems, to do the work that is planned for the next generation of fighters). And the same continues today with the new weapons systems. Interestingly, in the NYT piece linked above, it appears that these folks are sitting out this debate. Perhaps it is because Gates is not really cutting that much from the big projects but shifting priorities to other things that defense contractors can build.

The third dynamic is Congress. This is where much of the resistance is based, and where it is most significant. Congress has kept alive programs and bases that Presidents and SecDefs have tried to kill. Partly, there may be an honest difference of opinion about how to weigh the present war concerns with the threats (China, China, China, Russia) down the road. Partly, this is an avenue through which Republicans can fight the Obama Administration--an area of party strength at a time where it is declining everywhere else. But there are Democrats who are also pushing back.

Congress's ability to resist depends on its ability to find allies within the military, and those will always exist. The US Air Force has already faced much criticism for downplaying UAVs, which have been a much greater force multiplier than the F-22. The traditional and likely corrrect story is that the USAF is run by pilots who see their livelihoods, egos, missions, power and future budgets at risk, threatened by UAVs--where the U stands for Unmanned.

My best guess is that Gates will win some of these battles but not all of them. When Americans are dying due to vehicles that are poorly designed for a counter-insurgency campaign, it will be tough for the Army to argue that it needs weapon systems that can only operate in a conventional battlefield. The SecDef does have the power to micromanage, as we saw to great misfortune in 2003-04, so that he can send specific units to Afghanistan even if the USAF resists, such as more helos as ambulances. But on the big projects, the chances of eliminating projects are low as long as the systems are built in a majority of Congressional districts.

At least Gates is confronting the reality that the US does not have unlimited $ to throw at the military and has to face tough choices. Up here in Canada, the tradeoffs are more stark, as the much more limited defense budget means that Canada can really only afford one or two branches if it wants to have quality Forces, but not all three. It needs to choose having an Army or a Navy or an Air Force or two of the three, but it cannot do all three very well. As a result of trying to ignore the difficult tradeoffs, Canada buys used submarines from the UK which break down on their way to their new country. The new focus on Arctic Sovereignty and spending money on ships and planes that can operate way up north (although the new icebreaker may only be ready after global warming eliminates its raison d'etre) should mean that the Canadian Army comes home in 2011 and never goes out in the field again. To be clear, I am an Arctic Sovereignty skeptic since Canada will never be able to buy enough stuff to deter the two likely violators--Russia or the US. But it should be obvious that Canada cannot have it all and must make the hard choices, just as Gates is trying to do. Instead, the Canadian Forces often show up around the world willing to do the hard work but having to rely on others to provide much of the stuff they need.

So, ultimately, Rumsfeld was right--you go to war with the army you have, not the one you would like. But, then, perhaps you should spend more effort thinking about whether one should go to war if it means being unprepared.
Posted by Steve Saideman at 8:11 AM

I like this piece... though I am grateful to the purveyors of polar peril for making CFP a little cooler (no pun intended).