Perhaps life is imitating art, and not in a good way.

First, pirates become all the vogue (if that makes any sense), with a series of blockbuster

movies: Cutthroat Island? No, Pirates of the Caribbean. Despite significant decreases in quality and coherence, the series continued to clean up at the box office in North America and around the world. Talk Like a Pirate Day (September 19th) has gained in popularity, becoming an international phenomenon. A pirate game was one of the first to sweep facebook. Indeed, a major religion has seized up on piracy's decline in the 20th century with the rise of global warming:

Sure, some might suggest spurious correlation--that there is no real causal process at work, but more research is required to determine the connections. Even now, scholars are scrambling for grant money to find the causal mechanisms involved.

All of this attention to fictional pirates and questionable correlations has been followed by ... a sudden spike in piracy (although it may have actually peaked a few years ago), particularly in the waters off of Somalia, but not exclusively so. While the actual impact of piracy in the aggregate is actually quite small, it is still disturbing (at least for the sake of this post) that the media fad in piracy has been followed by an actual wave of piracy. Why is this disturbing? 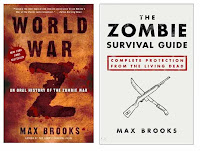 the trend du jour is: Zombies!!! There have been an outbreak of zombie games (Last Stand 2, Resident Evil, Pandemic 2, Zombie Rampage); movies (28 Days/Weeks Later, remakes of Day/Dawn of the Dead, Shaun of the Dead [my personal favorite]; and books, including World War Z and the Zombie Survival Guide, both by Max Brooks, with the former soon to be a movie. Indeed, WWZ has even spawned a fan fiction site.


So, is H1N1 really a coverup for a Zombie outbreak? Is life once again imitating art? Given how poorly governments are likely to react (again, see WWZ), I certainly hope not.

There is good news, however. The newest fad, that of moping emo Vampires (Twilight), is far less threatening.
Posted by Steve Saideman at 9:49 AM

You forgot zombie adaptations of great works of fiction, in particular Pride and Prejudice and Zombies, which now appears above the original book on Amazon's search bar when you start typing in the title.

First line: "It is a truth universally acknowledged that a zombie in possession of brains must be in want of more brains."

I can see a few other adaptations on the horizon: A Portrait of the Artist as a Young Zombie... The Brains of the Day...