Failing the Kobyashi Maru with Pride!


Today, Mrs. Spew, College Spew, and myself went to the the Star Trek exhibit at the Aviation Museum in Ottawa.  It was a heap of fun, but not quite the same thing as the Star Wars experience we did three years ago.  There were far less artifacts from the making of the movies, although there were some.  The experience was mostly the same--you are given a doo-hickey (like a watch this time, I forget what shape it was last ime) that you press against a variety of interactive things along the way.  In the Star Wars experience, it was about identity and what kind of Jedi (or Sith) one might be.  Here, it was to determine which specialty one should have in Starfleet: Command, Science, Medicine, Engineering, Comms, whatever.  Didn't provoke as much thought as the identity theme of Star Wars.  But it did get me interested in watching the Enterprise series led by Scott Bakula. We started watching long ago but then stopped after a few episodes.  Apparently, it got better.

Overall, the experience was good, but too crowded as there were many lines for the various interactive activities.  Still, some were quite cool, including being teleported:


Below are some pics of the experience:

I enjoyed the effort to put all of Star Trek history into context, starting with WWIII:


The most giggle worth bit since the shows violate this on a regular basis: 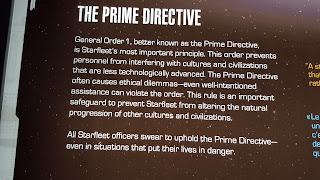 Posted by Steve Saideman at 4:49 PM