Yesterday, I returned from the latest APSA meeting, this time (and seems like every time) in San Francisco.  Despite the heat (over 100 degrees!), it was a terrific meeting, as I met new people, hung out with friends, learned much from the papers and presentations, got good feedback, and said goodbye to Will Moore.

I was pretty annoyed that the meeting was in SF, as it was just there a couple of years ago, it will be there again soon, and ISA will be there in the spring of 2018.  Apparently, breaking a lease in 2011 due to a union issue (and leading to fantastic Seattle meeting) has consequences.  SF was both better and worse than I remembered: seems like more good restaurants (Indonesian!) near the hotel but the smell of weed is now seen as a better alternative than to the smell of urine.  The tenderloin district of SF, where the hotel borders, remains tender.

But the stuff inside the hotel was great.  I think I set a record of how many virtual friends (twitter followers, followees) I met in person.  I really enjoyed those encounters: 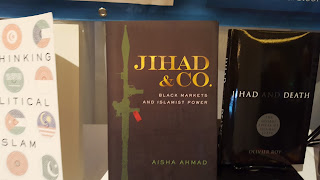 I am super-proud of my students.  This time, tis Aisha Ahmad with a fancy new book packed with insights and relevance about the politics of Islamist state-building efforts.


The professional stuff was excellent.  I served as discussant on a panel on nationalism, geography and violence.  I have not worked much in this area for a quite a while as I turned to alliances and civ-mil relations around 2008.  So, I had to use old brain muscles, and it was a pleasure to do so.  The papers were all quite good and got me thinking in new ways about the old stuff.  Turns out separatist violence is still hip.  Good for me, bad for those in the crossfire.
My panel on civil-military relations was excellent.  The other papers were interesting and spoke to mine, and our discussant, Lindsay Cohn of the Naval War College, was terrific.  It was my first chance to present a paper on whether external threats are leading to better oversight over Japan's Self-Defense Forces (nope). 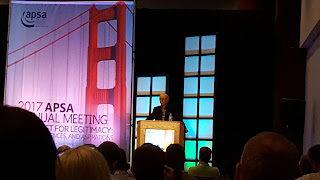 David Lake gave his address as outgoing APSA president. I attended since David has long been a terrific ally in my career.  He was not my advisor, although people think he was. We overlapped at UCSD by only a year or two, but he involved me a great edited volume project and has provided great advice over the years.  The intro by Susan Hyde was super-sweet and on target. 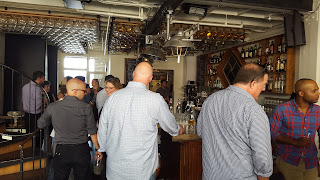 The sad stuff: there was a very sweet memorial roundtable for Will Moore.  Ashley Leeds, Christian Davenport, Idean Salehyan, and several others presented their perspectives on Will and his work.  The audience then shared their memories.  I offered up my take on Will's humor (he was very funny except at his Duckies presentation last spring), as I needed to think of something fun at this time.  Later on, a smaller group met at a bar on the bay, thanks to Michael Ward and David Davis.  It was not a rowdy wake, but a good chance to take advantage of the community that Will had built.

The super fun stuff: Mona Lyne was a year behind me in grad school, and had just won a teaching award, so that served as an excuse to party.  We got the band back together--much of those who were in her cohort, mine, plus a few others and including some folks who did not become professors.  It was the first time in 25 years that all of us were together.  Facebook has provided some glue to connect us, but it is not the same as hanging out and yelling at each over belly-dancing music.  Ooops, yeah, the only restaurant that would like a large group without charging incredibly high fees turned out to be a Moroccan place that was very, very loud.  We retired to the Hilton for some story-telling after the dinner.  I am so glad we did this, as I love those folks.  They not only made grad school much better (they were sharp and funny), but made my time in San Diego the highlight of my life (other than College Spew).  I felt kind of goofy taking pictures of folks while they were talking (I have long hated it when photographers disrupt formal occasions), but am glad I did so.

Of course, it is revenge for the pics they took of me during my bachelor party of events I didn't remember.
Posted by Steve Saideman at 11:58 AM