I will be meeting General Kelly, General Mattis and other military leaders at the White House to discuss North Korea. Thank you.
— Donald J. Trump (@realDonaldTrump) September 3, 2017

FFS!!  How many things are wrong with this statement?
I get it--that folks are relieved that adults (Mattis, Kelly [that same Kelly who was superenthused about banning Muslims]) are in the room.  But I continue to fear for civilian control of the military.  As I have long contended, Mattis does not really count as a civilian--his mindset is still military has he has little time to develop a more civilian perspective.  The law required a seven year break for a reason, even if Congress waived it this time.   I have argued since the appointments started being named that relief about the right generals being appointed was driven largely by tyranny of low expectations.  "Woot, Mattis" is really code for "Trump could have named someone far worse, so yeah!"  Just because Mattis is smart and well-read and cautious does not mean things are in great shape.

Yes, we are willing to violate the norms of civilian control of the military because we think that Mattis and McMaster can restrain Trump from starting a nuclear war with North Korea.  But two things are important--this ain't good for the future AND it hangs on us thinking that Mattis and others have the right ideas when they want to manipulate the President.  Given that some of these folks, including Mattis and McMaster might just want to attack Iran (something that caused Mattis to have friction with Obama), they might just get their way: "Mr. President, Obama wouldn't attack Iran... "  So, yeah, good to see these guys manipulate the President to avoid war.... but not really since the manipulation of a President by military guys is bad, bad, bad, and they might just manipulate him into a war.  We have long forgotten the failed Yemen raid of late January, but that was an escalation caused by the military folks goading on Trump.

So, once again, I think we are a severe crisis of civil-military relations.  Where is Congress, as it should be exercising oversight?  Anyone?  Anyone? 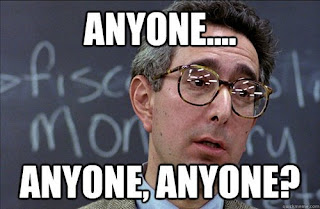