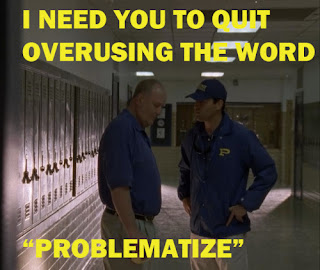 I have long criticized how popular culture portrays professors: mostly as lechs seeking sex with their students.  But it is not just the media's fault.  There are heaps of silly stereotypes that are spread and reinforced by the pundits as well.  This week, someone slammed profs in their faculty lounges, and I had to wonder: had they been in a department sometime in the last 25 years?  Faculty loungers?  Sherry swilling?  Yes, we occasionally wear tweed, but most of the stereotypes were either never true or haven't been accurate in a long, long time.  So, I asked my twitter followers for their fave stereotypes:

There was some dispute about the tweed.


Yep, was there ever really a time where every prof had a secretary?

Jackets with elbow patches, alcohol in our office that we drink before class, the notion that we have read every book on our shelves.
— Sara Mitchell (@sbmitche) June 15, 2018

I used to have a jacket with elbow patches, and I did have a prof who showed up to my UK summer program classes well lubricated.


Liberal elite brainwashing our kids. (No: presenting facts; developing critical thinking skills so they have minds of their own, duh).
— Lisa Tant Pis (@LisaTantpis) June 15, 2018

Yeah, that is still a perception.  I saw a woman regaling on twitter about how she encountered a security person who would not believe she is a Dean.


That we work/live in Ivory towers. I mean how high could a building made out of Ivory really be? — certainly not tower height
— Ashly Townsen (@ashtownsen) June 15, 2018


You could murder someone right in your classroom, be convicted and still be tenured even while in jail.
— Kevin (@fiddlehead22) June 15, 2018

Yeah, tenure may protect one from being fired for sexual harassment, but murder?  Probably not.


Read Latin and Ancient Greek and have long conversations in a dark-paneled office festooned with hide-bound books and the occasional boar's head in which we scoff at someone else's interpretation of an obscure passage in Ovid or Aristophanes
— Russ Burgos (@Russ_Burgos) June 15, 2018

Um, not sure most folks think that hard about the role of the ancients.

The one accurate stereotype--we are absent-minded.  I was just saying the other day .... something.  Well, never mind.


I am sure there are other stereotypes that were not mentioned.  The basic idea is that we are misunderstood.  Which, of course, applies broadly, not just to us.  We are always most aware of what folks get wrong about ourselves and not so much what they get wrong about others.  Anyhow, please add to my list if you have a favorite or two.