My first week in Chile endeth with a lot of walking, some climbing, some riding, lots of obscured views and a really big mall.  When I interviewed a retired officer this morning (yes, a Saturday!), it was beautiful.  So nice that Deadpool and Spider-Man swung by.  Then I went back to my hotel room and changed for a day of adventure.  As I left my hotel room, I realized my sunglasses were not necessary--the fog had rolled in.

Do I continue my plan to go to the top of Metropolitan Park, complete with a big Virgin Mary statue OR do I skip that and find some museums?  Amy's rule kicked in--when you can climb while touring, do so (Amy is a close friend of my wife and they explored Europe together long ago when there was still a wall and there was not yet a Euro and Donald Trump just a frickin joke).

So, off I went to test at maxim--you can't have a funicular without fun!  And it was a delightful ride up despite having a lousy view.  I then went on the paths and steps to get to the top, passing by a group of hip young folks swing dancing. 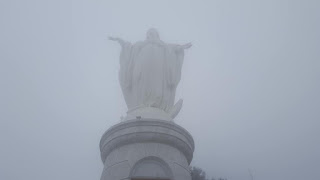 After seeing Virgin Mary covered in fog, I took the gondola to the other side of the park.  I got off at the wrong stop, but had a pleasant walk down the hill.  I checked out the Open Air Museum--a statue park with more dancers (belly), and then hit a mall.  No adapters for the strange Chile plugs (a row of three prongs), alas, but lots of choices of everything.  It was vast, and it tended to keep like stores together--sports clothes in one spot, electronics in another, etc.  One of the outdoor sporting clothes store was called Canadienne!  The food court and restaurants at the top were massive.  I got to watch the last 5 minutes of the Portugal-Uruguay game and then highlights of today's games as I feasted.

What did I learn along the way or forgot to mention in earlier posts?
Anyhow, it has been a productive, enjoyable week with much awesome food.  Tomorrow, I try to ski in July to celebrate Canada Day.  Ok, to see the Andes up close and have some fun.  Ciao ciao. 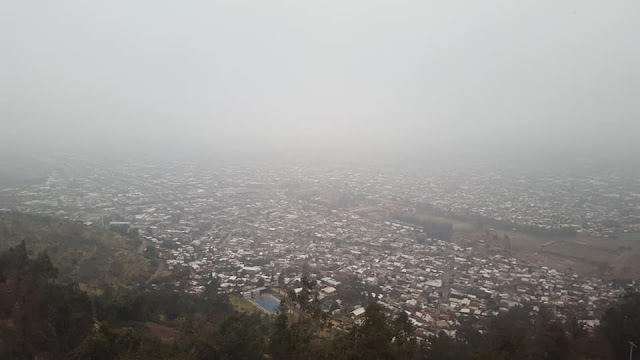 Posted by Steve Saideman at 8:05 PM

Based on my United States experience, I think Johnny Rockets are just reliably slow.