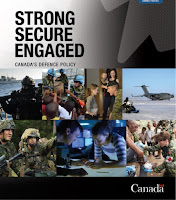 Today, I had the chance along with Stephanie Carvin (my NPSIA partner in crime), Col (retired) Charles Davies, and Matthew Overton of CDAI to discuss the Canadian Defence Review--forever known now as the SSE (see the cover page to the right)--and where things stand now.  The audience was the Canadian Military Engineers Association, mostly active and retired army folks, which allowed me to snark at the Navy and at the Infantry.


I entitled my talk "A Cranky Academic's View" although, to be fair, the SSE is not a bad document. I talked about how the review process involved far more consultation than I had expected, although it is not clear that the consultations changed the document that much.  I don't really know how much was pre-baked before the consultations except for the emphasis on more academic engagement--that was clearly a product of lots of folks chiming in.

I did point out that a common complaint was that the Defence Review process happened before the new government could do a foreign policy or grand strategy review.  If the Defence stuff is supposed to fit into a larger plan about Canada's role in the world, doing a review without a clear concept of Canada's role is a problem.  We were asked in the Q&A about how the Canadian Armed Forces plays with other government agencies, so I said not well.  That the efforts to build "whole of government" are resisted mightily by all government agencies, so perhaps even if there were a big plan for Canada's grand strategy, the CAF and DND might resist.

Instead, the SSE emphasized deployable units--that air/sea/land units should be considered essentially as different sets of packages for different missions and that each should have a number of packages for a number of possibilities.  This has actually played out in reality as the army has one package in Latvia doing tripwire/alliance stuff, one doing training in Iraq, one doing training in Ukraine, a helo package in Mali, etc.

What annoyed me about the SSE: 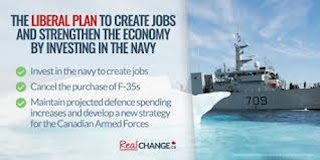 That there were no hard choices made and it seems like the Liberals saw procurement as jobs programs rather than defence programs.  One thing I didn't raise in the talk, because I forgot, is that the Saudi stuff should remind us that if we want a defence industry in Canada, it then leads to difficult choices like who to export arms to? Because Canada can't buy enough to sustain an arms industry.... Anyhow, back to the ships, I blamed industry as they crap over a program when they don't win (see today's news that the government can't make decisions on the ships until a court case is resolved).

I did also discuss the personnel part of the SSE--that it was put first and this was properly symbolic given that personnel are 50% of the budget AND recruiting/retaining folks is really hard.  If demographics say that there will be fewer white men from areas that traditionally supply the recuits to the CAF, then, hells yeah, we need a diverse force--women are 50% of the population, non-white folks are an increasing chunk of Canada. If those folks are really part of the recruiting pool, the pool is deeper, which means one can be more selective and get more quality. Oh, and yeah, we need to deal with misogyny and white supremacy within the ranks if we want a deeper pool of recruits and retain talented, trained people.

I concluded by saying that progress would be hard to measure, that any party will be held hostage by Halifax and Vancouver so the ship building program will continue, and that we really have no idea what the next Liberal government will do after 2019, but that since they don't seem to care that much about deficits, the programs in the SSE are unlikely to get cut.  Yeah, I am already counting out the Conservatives (a blogpost for another day).

Chuck Davies did a great job of putting the SSE into context--juxtaposing it with French, American, British and Australian reviews of late.  He spoke mostly favorably about it, but also raised a big issue which is becoming a theme for my civ-mil stuff--the more complexity one adds to the decision-making process, the more different oversight actors that are brought in, the harder it will be to make decisions and hold folks accountable.

Stephanie Carvin talked mostly about technology and the SSE--that there is a risk of magical thinking that tech will fix things, but much tech raises difficult problems and that tech will not solve the fog of war.  She pushed back against the idea that Canada can't do much since it is more than just a middle power--it has a big GDP (compared to most places), a large tracts of land (sorry, my interpretation), and heaps of other stuff that should allow it to make a difference.  While I tend to scoff, she's right that Canada can do more if it has focus and an agenda.  The challenge now is what to do when all of the assumptions (US as reliable partner) are up for grabs?

The last question was on the public--that Canada's public doesn't care and is ill-informed about defence stuff.  I indicated that this is not very different from our allies, contradicting the questioner, as few voted on Brexit or for Trump based on defence policy.  Stephanie argued better that than I could that the public could be better informed and should be. She is working on some initiatives with CDAI and I am working via the CDSN to address this stuff.

Overall, it was an interesting morning, as I learned a lot from both Steph and Chuck as well as a conversation with Matthew that preceded the event.  As always, I love my job, and I love being in Ottawa where so much of this stuff gets analyzed, discussed, and, dare I say it, disseminated. 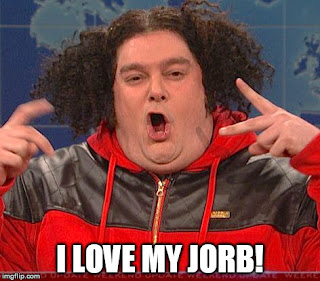