Pentagon Explainer: A Building With Many Pieces

Yesterday, twitter got fussed that the "Pentagon Chief of Staff" resigned his position.  This was very confusing--there is no such position.  Did this story refer to the Chairman of the Joint Chiefs of Staff General Dunford?  No, it referred to retired Rear Admiral Kevin Sweeney who served as the chief of staff to the Secretary of Defense.  People seemed to think this post is a big deal, that it might mean a hole in the chain of command.  Nope.  It is just the guy who runs the SecDef's office, who was chosen by Mattis because he was a friend and respected colleague of Mattis. 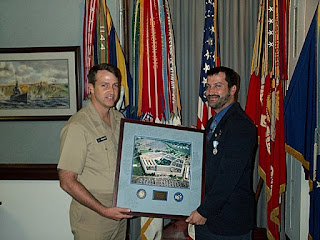 So, let me clear some brush here, as others are doing so.  The first thing to understand about the Pentagon is that it is not nearly as united or coherent as people think.  The building itself consists of five rings that are connected to each other and five wedges.  When they renovated the building--both before and after 9/11, they did that one wedge at a time.  The only truly Pentagon stuff are the souvenirs:

This architecture is nicely symbolic as there are no Pentagon posts except perhaps for Pentagon journalists.  Otherwise, if one works in the Pentagon, one belongs (and I do mean belongs) to either:
I don't know where the Coast Guard fits since it is both in the Pentagon and within DHS, and the Reserves have some staff somewhere.  But let us ignore those for a moment--note the five pieces.  Who says that seven is the most magical number when everything in Arlington is divided into five?

Anyhow, the point here is that there is no Pentagon job.  Sometimes, there might be a Pentagon position--when the Joint Staff and the OSD agree on something.  That may have been common in the past, but was certainly an exception in my year as Rummy's people and the Joint Staff rarely agreed on stuff.  Maybe the past two years we have seen building positions, as Marines (ex or otherwise) have led both sides.

All this points to a larger dynamic--we tend to freak out too easily these days.  It is hard to tell which changes, which moves are normal and which are abnormal since Trump is destroying most norms and is causing chaos on daily (sometimes hourly) basis.

When it comes to the Pentagon, just keep in mind that it is a strange place with a variety of processes and procedures and acronyms that most people are unfamiliar with.  The saner experts (the Bombshell women are a good group of such folks) will let us know whether something is normal or offsides.  Or in other words, rather than hitting the panic button, ask yourself this:

Even in the age of Trump, the answer is often no, not yet.

Thank you for this.