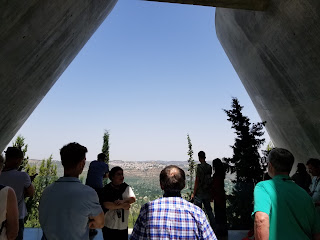 Yesterday, we started by going to Yad Vashem, the Holocaust museum.  The building is impressive, but I was disappointed.  How so? The building is one long stretch with the walls leaning inward.  One cannot go straight across but has to go right, then left, then right, etc which illustrates so many turning points and also makes the place feel like it is getting smaller and smaller. the place was quite crowded so I asked if this was deliberate to make one feel like one is in an overcrowded ghetto, cattle car, concentration camp, and the guide said yes, but the popularity of the place made it far more crowded than intended.  The exhibits were amazing: lots of artifacts, including the cobblestones from the Warsaw Ghetto.
(for my previous posts regarding this trip, go to here, here,here, and here)

The guide emphasizes the “righteous among the nations”: something like 27000 non-Jews who risked their lives to try to help.  What she didn’t emphasize were the efforts that some Jews made to resist.  We only heard about the Warsaw ghetto uprising because someone asked.  She did say something interesting that I had not realized before: that there was not much organized resistance until towards the end because collective punishment meant that resistance only made sense when folks realized that everyone was going to die anyway. And then they were “fighting for three lines in the history books.”

One disappointing thing about the place, but is understandable I suppose, is that it makes the Holocaust an almost entirely Jewish experience.  In other museums, I saw more stuff about what happened to gays, to Roma, to disabled people, to socialists, and others.  6 million is a lot but is only a bit more than half of the 11 million killed in the camps and elsewhere.  Even if the number goes up 8 million thanks to new research, 5 million others still matter quite a bit.  I am sorry we didn’t see the children’s memorial.  The gift shop had wildly inappropriate t-shirts.

We returned back to the hotel to hear from two people who pool the Israelis and Palestinians.  Their findings really taught us that nothing is going to change anytime soon.
I asked my favorite question: how come Netanyahu doesn’t pay a price for embracing anti-semites?  The answer is that the only folks who care don’t matter.   Everyone knows Netanyahu is an asshole, but that is priced in.  And Israeli voters are just focused on power politics.  That the world is unfriendly so Israel can’t be choosy.  So cozying up to Putin or Trump or Orban just makes Netanyahu influential, not a sellout of Never Again.  Well, he is to me.  I find it strange to be friendly with Viktor Orban because Hungary is a weak player in IR, so why suck up to that antisemite?

Our last speaker talked about the concepts of Jewish state and democratic state and the contradictions.  His take was interesting and nuanced, and I could only conclude that Israel is going to be less democratic. He was very interesting, very smart, and I am now even more frustrated.  It did make me think more about my identity but that is a post for a different day.  The big news there was that the Law of Return is based not in what the religious rule is to be Jewish but the Nazi rule: one Jewish grandparent is sufficient.

We then went to the western wall as the sabbath was beginning.  It was quite interesting to see so many happy Jews, with those at the wall divided by gender: men to the left, women to the right.

A long, complex day.
Posted by Steve Saideman at 11:55 AM