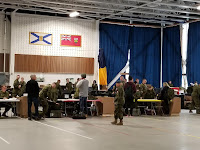 I am sore but pretty thrilled today.  Why?  Because yesterday, I got to participate in Operation Collaborative Spirit--a military exercise at a base two hours from Ottawa.  Petawawa is the base for the Second Combined Mechanized Brigade of the Canadian Armed Forces (if I am remembering the briefing right).  So, the combined and mechanized means they have light armored vehicles, artillery, engineers, medics, and, yes, infantry.  Each year, for about a week, they hold exercises where the participants are various kinds of "stakeholders": politicians, foreign military officers, businesspeople, government employees, and random academics.  For my day, it was mostly business people, DND employees, and one random academic.  Below, I will run through what happened, then a few things I learned, and some reactions (besides Woot!) with heaps of pictures and some video along the way. 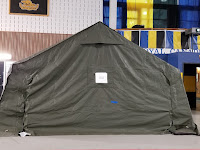 We met at 0600 near City Hall (the parking lot was convenient in the morning, much less so when all of us returned at the same time and tried to leave at 2200), and we got on a set of buses.  While waiting, I met some of my company-mates (a company is roughly 100 soldiers, and we had 108 or so people going) including young policy officers serving at DND including at least one NPSIA student  and one #BattleRhythm fan, one head of CDAI (a CDSN partner), and many others.  At the end of the bus ride, we met in a very large room that had a big map of the exercise on the floor, a very efficient set of soldiers who gave us bags containing our gear (we had given our sizes ahead of time) and took our valuables for safe-keeping.  We were to change in tents set up inside the building, and I was surprised but pleased to see a gender-neutral tent in addition to the male and female tents. 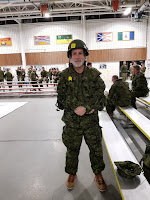 I got into my gear--they gave us pants, t-shirt (the one item we could keep), overshirt, protective vest or whatever it is called, and then the external harness to carry our magazines and other stuff (I used the spare pockets to carry my camera and my notebook).  Yes, I had the full battle-rattle.  In addition to the helmet, they gave us a soft cover (floppy hat), but we never had much use for it. 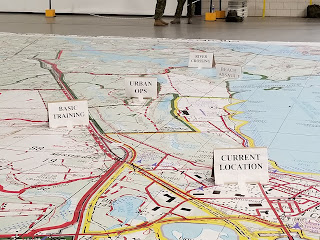 They then briefed (we got heaps of briefings) about the day ahead.  We were to get basic training, then take the urban area, and then invade a beach.

The premise was that a country invaded an ally, had been pushed back by the coalition (there was no interactions with allied forces, so I couldn't ask about caveats), and our job was to mop up the folks who remained in our friend's town and then disrupt their use of a beach for shipping arms/people/drugs/etc.

The basic training consisted of three parts: shooting stuff, a display of equipment, and brief training on firing our guns (we had blank-shooting rifles). The display included a drone, one of the boats we were going to use later, radar systems for detecting incoming arty, anti-tank systems, cluster bombs and mines and the detection equipment for finding that stuff, recon vehicle, a 155mm artillery piece, etc.  The training also included room-clearing procedures, which we needed for later.


The shooting stuff was, of course, the best part.  They had a sniper rifle setup, LAVs for firing 20mm guns and 40mm projectiles, heavy and not so heavy machine guns, shotgun, rifle, and pistol (they also had a grenade launcher display but they didn't trust us to try that).  Due to the lines in front of each, I only got to do a few of these things: machine gun, shotgun, pistol.  I was so good with shotgun, I destroyed one of the targets.  I know now that in a zombie apocalypse, I will arm myself with a shotgun and a spear (I learned at an axe throwing place in Vegas that I am better with a spear than an axe).

We then received a more detailed briefing about how we would assault the town and then the beach.  Yellow platoon (note the yellow on my equipment in the pics) would move second, after Red took the first set of building s with Blue providing suppressing fire.  Then Blue would go next with Red taking the hq of the enemy.  From there, we would go to the beach, get in our boats, cross the Ottawa River, and Yellow would take the beach with Blue and Red following by sweeping around with us providing suppressing fire.  That was the plan, and it mostly survived first contact with the adversary (the adversary was most cooperative). 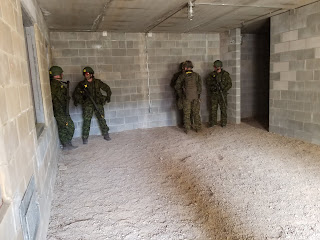 This is the room we cleared--no adversaries present so no shots fired. No, I did not take any pics during the attack. 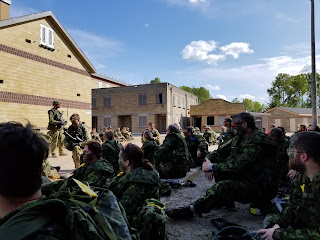 We then met for an after-action review.  The commander asked each platoon as well as the enemy what they did well and what they did poorly, so we could sustain the former and improve on the latter.  Definitely something to borrow perhaps as the last session of CDSN events. 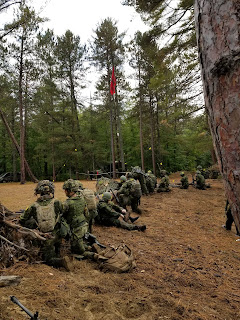 The next step was the beach invasion.  We got mighty wet as we were positioned with one foot inside the rubber boat and one outside.  It was most unrealistic in that we had to connect our rifle slings to the boat so we didn't lose the guns, and we had to wear life vests. Which meant as our boat landed, we had to undo that stuff, making us sitting ducks.  I ended up grabbing my backpack (full of snacks since I didn't trust the Canadian version of MRE's--IMPs--good for pre-colonoscopy prep) and throwing it ahead of me as I hit the beach, then ran to behind a tree, and the up to a fallen log that I used as both cover and to prop up my rifle.  In the proces 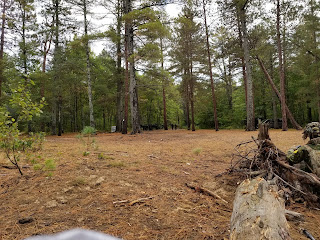 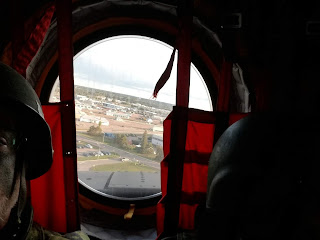 What did I notice and/or learn:
Overall, I learned a great deal about the Canadian Army, how it operates, who is in it, where they have been (Latvia), and what they do most of the time.  Oh, and I learned a bit about my own limits.  And it was a heap of fun.


PS  I disappointed my wife by failing to respond at some point during the day with a Bill Murray-esque "Army Training, Sir!"
Posted by Steve Saideman at 1:24 AM