The Years of Reviews

As I finished up my last review of an article for 2019, I checked out my spreadsheet where I keep track (sort of) of the reviews I do.  I discovered some patterns I wanted to think about: 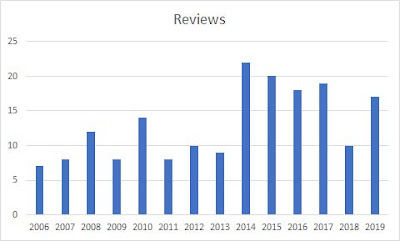 The figure includes reviewing manuscripts for journals and for book publishers, grant applications for various funders, and tenure letters.  Obviously, the level of work varies--tenure letters are a lot more work than all the others, book reviews vary depending on whether one is reviewing an entire manuscript or just a proposal.  But I didn't choose to code stuff carefully for this blogpost because this is already a relatively unproductive use of my time!

Anyhow, I reviewed before 2006, but hadn't develop the habit of marking down the details in a spreadsheet.  A few things stick out:
I tend to say yes to most review requests (see here for decision-making challenge of when to write tenure letters), but I have decided recently (too recently to affect any of the numbers except the last column) not to review stuff in the old field of ethnic conflict.  Because I am way, way behind in that literature and am no longer doing much work in that field (that may change, but not yet).

I do get fewer requests, I think, to do tenure letters since Carleton is generally not see as peer-ish as McGill was.  Most provosts and deans want tenure letters to be written by scholars at peer institutions, and they tend to have a rather limited idea of what counts as peer.  So, I am guessing I would be getting more tenure letter requests if I had stayed at McGill.  The aforementioned change in research focus--from ethnic conflict to alliances and civ-mil relations--probably helps to explain why I get more requests.  That there are more articles that editors and editorial assistants that fit into what they think of as my expertise.

There is something else going on--that there are more journals and more submissions to journals, so I may be getting more requests and doing more reviews as the need for reviewers intensifies.  Also, I joined a number of editorial boards, where the primary responsibility for being a member is to not say no when the editor needs to get some reviewers.  I have stepped off of a few as my shift has come to an end and, for one, as mentioned above, I can no longer be of much use.

Oh, and 2018?  That was the year where I had a great deal of work to do with the second stage of the SSHRC Partnership Application, so I think I said no a bit more often.

For 2020?  I expect to stay at my recent average of 18-20 or so--about 1.5 reviews a month.  However, if journals and presses do not ask me to review for them, I will not seek them out.  It is unpaid work, but a part of being a professional.  That and I learn a fair amount as the latest work contains all kinds of interesting ideas, useful citations, and stuff I don't know.

Here's hoping that your new year is chock full of speedy, positive, and helpful reviews.

Posted by Steve Saideman at 4:34 PM