I had to do something this week that I would not have expected long ago.  I told the editors of Ethnopolitics that I could not serve on the editorial board any longer.  Why?  Because I haven't done serious research on ethnic politics in quite some time.  My curiosity shifted.  It took a while to make that shift (the irredentism book that was the research project in the fellowship application came out in 2008).  Why did I shift?  At what cost?  At what benefit?

I got into this career both because of a dramatic lack of imagination (I had no idea what else to do--firefighter, astronaunt, cop?)  and because I am deeply curious.  To a fault.  The joy of the academic career is that one can pursue their curiosity as far as it can go.  For me, I fell into the international relations of ethnic conflict by accident.  I was thinking about sovereignty which led to secession which lead to ethnic politics.  So, I asked how ethnic politics shapes the international relations of secessionist conflict.

This project bred new questions--what causes separatism, is it contagious, can institutions ameliorate ethnic conflict, and, when will countries engage in irredentism (seeking to regain supposedly lost territories... and, no, Greenland does not count).  I mostly satisfied my curiosity in each area.  The institutions stuff met a premature end thanks to criticism of the dataset upon which I had depended.  Others entered the fray with different data and more skills, so I mostly moved on (there is still a co-authored paper in progress).

I had another ethnic conflict project--on diasporas.  What causes some diasporas to be more mobilized and even more extreme than others.  What happened to that project?  Well, first, I learned that I really am not very good at training people to code data, so the dataset was not that productive.  Second: 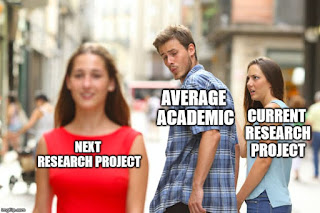 While I was doing the irredentism project, I spent a year in the Pentagon, which produced a big question about NATO which evolved into many questions about civil-military relations.  The NATO/civ-mil stuff was so very interesting that I focused on it at the expense of the diaspora project.  I can't say I have too many regrets because the NATO and civ-mil stuff has been great for me.  It has led to new partnerships (including a certain big one), a really great project with a great friend from grad school that led to a, if I say so myself, cool book, a spinoff book, lots of travel to fascinating places with usually very good food.

I am now involved in the successor project--comparing the role of legislatures around the world in overseeing their armed forces.  More interesting arguments, more great travel, much more excellent food.  It has led to surprising findings and intellectual challenges.

The project after this one?  We shall see.  I have some ideas, including one with a former grad student, about bureaucratic politics and good or bad decision-making.  I am pretty sure I will stick closer to the civ-mil stuff than return to the ethnic conflict stuff.

Bridging both areas has led to some fruitful exchanges and thoughts, but I am really, really far behind in what is being done these days in the IR of ethnic conflict.  Which means I am a crappy reviewer for most work in this area.  Hence my departure from Ethnopolitics.  I am sure journals will still ask me to review that kind of stuff, but I think the only responsible position now is to say no.  I can't really assess whether an argument in that area is original or making a contribution since I have lost track of the literature.  I may not be that much better read in civ-mil stuff, but that is the stuff that I am teaching, reading, and writing.

There are costs.  I think I could have been more productive if I stayed in the same lane.  I would not have had to read new literatures--just keep up with the stuff in the one area.

But the benefit is this: I love what I am doing now.  I still have ample curiosity about the stuff I am studying these days.  I am sure my enthusiasm for this stuff is obvious in the classroom, which makes for better teaching.  And, no, it is not about the travel, but about the conversations that make me see connections, that make me see the world a bit differently.  I am not rigidly committed to my initial hypotheses, although it always does come back to institutions (thanks to UCSD).

It turns out I picked the right career.  I tend to suck at things that don't interest me, and I do pretty well when I am interested.  This career allows me to follow my interests.  There was no grand plan except to study what I want how I want.  I didn't have control over the where, but that worked out well, too.  I know I am lucky.

As I finish packing for yet another APSA conference, I am looking forward to hanging out with the cool kids of civ-mil. I still hang with the ethnic conflict crowd, but a new area of research means meeting new people, and, as shy as I am (my wife is probably laughing downstairs), I do like meeting new people and learning more about the world from folks who share my enthusiasm.  Hence, my effort to plan a meetup at this conference.

I hope all the APSA-goers have easy trips and less fire (see DC APSA 2014).  See you soon.

jrutherfordmd said...
This comment has been removed by a blog administrator.
September 2, 2019 at 11:31 AM