The Real End to the Quarantine: Seeing a Heap of Family and Eating Way Too Much

For the eighteen months or so, my monthly email from google maps told me that my furthest trips were to the edges of Ottawa and not much beyond.  And for that same period, I had not seen any family, other than Mrs. Spew, in person at all.  Both of those trends ended this past week, as we drove to Philly to spend a week with almost all of the family on my side (we still haven't seen my wife's family since December 2019).  Facebook memories has been reminding me all week long about all the other trips over the years as this time of year has been Saideman-fest--on the beaches of the east coast, Lake George, a cruise to Alaska (the last trip with my father for his 90th birthday), and Disney/San Diego way back when.  The last few have been in Philly--because my mother can't travel.

So, what did I do and learn while hanging out in my hometown?  I learned that my favorite place for a steak sandwich, milkshake, and fries is still on top of its game as I met up with friends from high school.

I learned that there is a museum I had never heard of--the Mütter--which is a medical museum featuring heaps of really gross specimens of body parts and skeletons.  It also had a 1918 flu exhibition that was planned before the current pandemic with notes tying the two together--the name of this exhibition was "Spit Spreads Death" using the slogan and visuals of the time.  And, yes, Philly handed the 1918 flu worse than damn near every place else.  This time?  They handed the vaccinations over at first to some 23 year old with no experience.  Oy.  Now, the city is pretty well vaccinated and doing ok.  Mask wearing was mixed although better than what we observed in upper state NY on the way down and back.  Rural vs. urban remains the most salient divide on pretty much everything these days. 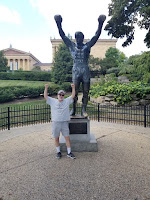 Some of us went to the Philly Art Museum, which remains as huge as ever.  I walked around a bit before folks got there, and a guy took a few pics of me with Rocky.  We spent most of our time in the American art section--1700s and 1800s--and the modern art sections.  And the cafeteria there had great food.  The last time I was here, I hung out with Brooke Shields.... ok, I was a valet and parked cars for a big event where she walked near me. 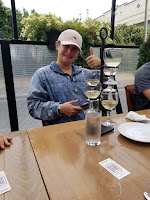 Speaking of great food, we aimed to eat outdoors as much as we could--my mother loves to make reservations--but we also had more meals at my mom's place than usual to minimize our exposure to folks. 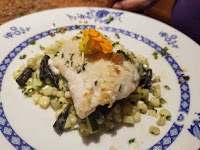 My brother demonstrated his prowess as a professionally trained chef.

I had to rely on my year of skill development to compete. Which meant I got to cook one night, focusing on Nigella and King Arthur--chicken shawarma, pitas, chocolate chip cookie dough pots (in a muffin pan), and veggies.  The oven had a glitch halfway through the pita making process, which scared me--I didn't think we would end up with everything getting cooked.  But it worked out.  My sister's curse (she has had repeated crises on Thanksgiving--broken oven, power failure, plumbing issues) hit me, I guess.  Anyhow, the folks liked it and ate it up, so my job was done.

Our last breakfast together with everyone was a bagel picnic.

Perhaps the second biggest highlight of the trip was meeting up with my cousin and his family at the Jersey shore.  His kids are young and cute and full of energy, so they dragged me repeatedly in to the cold water, and chased their own bad throws as we played frisbee in the sand.  The only downside is that the combo of not stretching, running in the sand, and plunging into the cold water did not help rehab my calf strain.  I may be able to play next week, but it will be a risk.

The highlight?  Seeing my daughter in person for the first time in a long, long time.  She is now an amazing adult with a cool new job. I can't wait to go to the west coast to meet her cat and see new apartment and meet roommates and all that.  Some day... as travel across the border is easier but not easy. 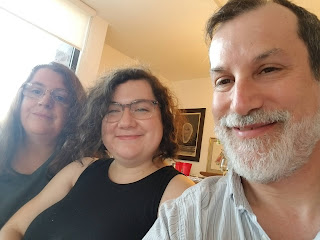 We had to spend $ to get a fast set of tests, we had to download and fill out the ArriveCan app (should be CanArrive), sweep our own nostrils at the border, and so on.  All good, but lots of uncertainty remain about flying.

It was definitely strange to move from seeing no one and traveling nowhere to a few small meetups to a massive gathering and heaps of travel and much going out.  We were careful most of the time with our indoors eating in large but uncrowded places like the Reading Terminal Market.  It was very much worth it.  And I sure as hell hope it won't be so long until I see these folks again.  Indeed, our Thanksgiving planning has already started.