The Fall of the Afghan Government: The Big Questions 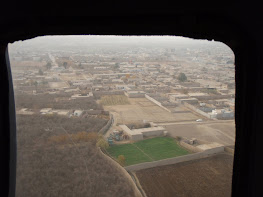 There already has been and already will be much discussion of what all of this means.  Since I rode my bike yesterday and the podcast ran out, I have thoughts.  It is, of course, premature, but this is the place for half-baked ideas--the semi in the spew.

The first question is: did social science waste its time and money?  Stathis Kalyvas asked this question today

Can’t help but wonder about the implications of the Afghan debacle for the social science of counterinsurgency: dozens of generously funded studies in Afghanistan, tens of cutting-edge articles using Afghan data published in top journals, amounting exactly to what?

I responded to him by noting several things

There is an irony here--that Kalyvas led a movement in the comparative politics of civil war, arguing that the local dynamics and the national dynamics were different, that the master narrative was often deceptive.  Well, the social science stuff done on the war may have been good at grasping elements of the local dynamics, but it turned out the master narrative mattered, too.  That the Taliban was able to take the local stuff--fights over property, groups being left out of the spoils, etc--and use that to undermine a weakly institutionalized and very divided Afghan govt and society.  A recurring theme--easier to break than to build.

The next question is: was it worth it?  Depends on the it one is referring to.  The goal was a self-sustaining Afghan government, and, that effort clearly failed.  If the it was more about meeting alliance obligations, which is why most of the non-American countries showed up and which is how I define the "it" in my book on Canada's experience, then it is a matter of what were the benefits of meeting an alliance obligation versus the costs of opting out.  Opting out of Afghanistan would have been costlier than opting out of Iraq, but were those costs worth over 160 Canadian lives lost and many more wounded?

A different way to think about "worth it" is did the effort make either a significant difference in the 20 years that it was worth it or if there is stuff that will endure beyond the Taliban's victory today?  There is no doubt that life got better for Afghans after the Taliban was ejected--the measures in terms of infant mortality and women surviving childbirth are clear.  The folks who were immunized due to a polio vaccination campaign will not get polio, so that is perhaps the most enduring contribution by the outsiders.  So, there is a generation of Afghans who live now thanks to the intervention.  But is that worth the 3500 lives lost by the allies and the tens of thousands of lives lost by Afghans who got caught in the middle?  How many would the Taliban have capriciously killed in the past 20 years if they still governed?

Is Afghanistan better off today than Libya or Syria?  Those are places where the US intervention was more modest.  I am not sure--part of this depends on what happens next.  But, ultimately, given that Afghanistan in 2022 is probably going to look a lot like Afghanistan 2000, it is really hard to say it was worth it. Maybe Rumsfeld was right in his original intention--that breaking the Taliban and then running would have been better, although, again, Libya suggests maybe not.

So I don't really have a good answer.

What can we learn?

Who is responsible?  Everyone.  The US made big mistakes at the outset---relying on warlords, having too small of a footprint, sponsoring a constitution that was a very bad fit, distracted by Iraq--and other mistakes along the way--cycling generals and strategies, for example.  Obama made mistakes, Trump didn't help.  Biden's team has handled this endgame poorly. The allies could have done better (see our book for some reasons why they didn't).  Pakistan did so much to undermine the effort, and Iran and eventually Russia did some damage. The Afghans were served poorly by their own politicians.

It is a land of bad policy alternatives, so I have a hard time articulating what should have been done in 2001-2002.  It is easy to note what should not have been done.  I think the key thing to remember is that the enemy has a vote, as they say, that the Taliban had agency.  So, one cannot read into the current dynamics too much about US mistakes without considering how the Taliban would have changed its behavior.  Again, it is easier to destroy than to create--we demonstrated that in 2001, the Taliban has demonstrated that ever since.  I don't know if the Taliban will manage to control the entire country, but they did succeed in denying control by the Afghan government and its allies.  What's next?  More heartbreak.

I am very sad for the Afghan people, who were poorly governed by their own, and let down by the international community.  I also feel bad for those in the various militaries and governments who sacrificed much and who continue to pay a price for what they tried to do, as they watch twenty years of effort reversed in a few weeks.

Posted by Steve Saideman at 8:51 AM

Email ThisBlogThis!Share to TwitterShare to FacebookShare to Pinterest
Labels: Afghanistan

It doesn't take much Brain Power to plainly see that Afghanistan is an Extremely Primitive society, very Tribal.
We followed Americans Blindly who had to punish Osama Bin -Laden. Instead of going to Saudi Arabia the real culprit, Idiot Bush/Cheney/Rumsfield Team went to Iraq, then Afg., a real quagmire, Destined to failure!
It is a civil war that Afghanis have to fight. only if Russia ,USA, Brits , France Dutch can keep their hands off this poor country.In fact Kabul was more advanced pre Russian Invasion where women went to University, some even in western clothes like skirts and blouses without any hint of 'Purdah system'( Burqa and Naqab etc.)
Every time a military solution is offered, it ends up in catastrophe examples being Vietnam Evacuation of Saigon, Division of Korean Peninsula, Chaos and looting
of Iraq with its aftermath, and of course Partition of India 70 yrs ago with a bloodbath in Millions of civilians that no one is even aware of.
Unfortunately we humans have attention span of a gnat.