Ten Years Off the Market And I Feel Fine

I saw a tweet yesterday about how wrong it is for academics to accept that they can't choose where they live.  For me, I never had more than a binary choice, starting with move for a temp job or ?  and then move to Texas or leave the profession and then move to a foreign country or stay in Lubbock and then move to Ottawa or stay in Montreal.  Not quite a wide range of choices at any stage.  And that was after managing to get a job offer, and it all reminded me that sometime this week will be the tenth anniversary of a strange email that put me on the path of ... chill?

In the spring of 2011, I applied for a job for which I had no real shot and I knew that going in.  But I was looking for practice and networking, and then something strange happened: I got a different job.  In August of 2011, I contacted a friend I had at NPSIA and I asked whether they could tell me what I had done well and what I had done poorly so that I could improve for the next round of job applications.  That friend said, no, wait, we have a new Dean who will call you soon.  The next week, I got the call and the offer.  Which meant many things including that I was not going on the job market in the fall of 2011.  I had been looking to move on for about four or five years, and that was pretty much my normal state for most of my career--my last year of grad school, my two years as a temp at UVM, pretty much my entire time at TTU, and then the second half of my time at McG--about 3/4s of my career until I got the Carleton job. 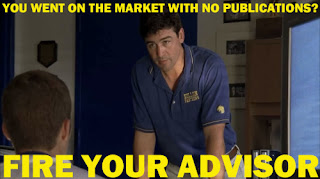 Over the course of my career, I applied to hundreds of jobs, got about 20 interviews, and got three offers--TTU, McG, Carleton--and had to explain the job market to those outside academia again and again.  This thread puts some of this into perspective for the current day.  In my experience, being on the market was a constant source of stress, a significant hunk of time, very distracting, and, yes, a significant source of stress (deserves mentioning at least twice).  I did meet some great people along the way, even at job talks where I failed and flailed.  Looking back, I see how each step helped me get to the next step.

And now, what is the next step?  Keeping on keeping on, as I am quite happy where I am at, and I am through running competing for a new job.  I forget how stressed I was for much of my career, but junior folks sharing their experiences on twitter remind me of the bumps along the way.  Losing to none of the above, forgetting a key hunk of my argument, invoking a really bad example that served to distract rather than inform, being delayed so that I arrive unfed just before the plane leaves only to have that plane diverted and then miss my connection home so that I had to sleep at the gate at DFW, ....

I am really grateful for all of the help I received along the way and for all of the solace I received from my family including the dog that accompanied us from grad school through to the first three jobs.  And I am really grateful I don't have to compete for another job ever again.  Now the questions are not about when and where I will move to next but when I will retire.  The answer: not soon.  I really like what I do, who I do it with, and where I do it.  Each step was an improvement along the way, and I am, COVID aside, happier than I have ever been.

Much sympathy to those on the market in this most difficult time.  Good luck!

Posted by Steve Saideman at 9:29 AM