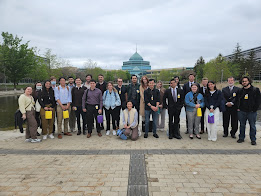 Last week, we had Safia Hafid's New Bipolarity conference.  This week, we helped Alex Rizkallah with his Hackathon.   The idea was to have groups of students brainstorm responses to three potential grey zone attacks--a ship in the Arctic, cyberspace attack, disinformation campaign.  Alex recruited students from Toronto, Montreal, and Ottawa (his budget was finite so we couldn't fly people in), and it was great to meet these folks.  We also recruited military officers, policy officers, and academics to
serve as judges.

The first day, the students were shuttled to DND's Carling Campus, where DND's Public Affairs folks hosted us.  After Alex briefed the entire group, they were sent to breakout rooms where each team of three to four students worked on one of the three scenarios.  The CAF's intelligence command offered a few officers to serve as advisers.  The Arctic person had to drop out, so I got to play that role, which was probably not so fair for these students since my Arctic understanding is meh.  Since the students only competed within each scenario, my lousy advising did not provide a competitive disadvantage. The second scenario focused on a ransomware attack from abroad aimed at a Canadian hospital system.   The third scenario involved a disinformation campaign.

Our hosts at DND were terrific as we got to see a hunk of the new HQ, they provided us with snacks, and they gave us a tour of the Afghanistan memorial.  During the war, the folks at Camp Mirage (in Dubai) and in Kandahar memorialized those lost in Afghanistan.  Those memorials were moved to NDHQ after much discussion (I would prefer that this was elsewhere so you can only see this stuff if you can get access to NDHQ).  It is always striking to see how young the soldiers and others who lost their lives in war.  Reminds me of a classic MASH episode where the commander said that Rule #1 of war is that young people die, and rule #2 is that doctors can't change rule #1.  The memorial included plaques not just for the soldiers but the civilians (government and otherwise) who died there including Glynn Berry, the first leader of the provincial reconstruction team; Michelle Lang, the one Canadian journalist who was killed in the course of covering the war; a few aid workers; and a social scientist whose name I can't remember or find.  The memorial also includes some Americans. 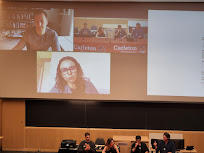 The second day, we hosted the students at Carleton, where each team pitched for 15 minutes (or a bit more) their ideas via slide presentations to the audience there and to the judges online.  We had three panels of judges--mostly experts on their respective topics--from DND, the CAF, academia, and other CDSN partners.  The students were given a guideline for how they would be assessed.  After the teams presented, we presented the plaques to the winning teams for each scenario.  We live streamed and posted online the event in English and French. 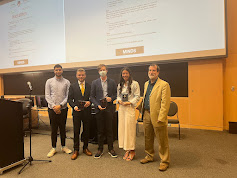 It was great to meet the eager folks from Toronto, Ottawa, and Montreal.  Many of the Montrealers were from McGill, so I was reminded of how sharp those folks are.  All the students made up a  terrific crew, bonding quickly with their teammates, with much better imaginations about the possible responses, great research skills, and varied perspectives. 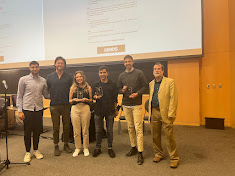 Much thanks to DND's MINDS program for funding Alex's event, to DND's Public Affairs folks for arranging our day at Carling, to the CAF's intel group which provided advisers to our students, to all of these and other folks who helped us find judges.  And thanks to the CDSN HQ crew--Kaha, Melissa, and Racheal--for helping Alex realize his ambitious project. 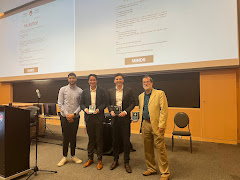 When we wrote the first big grant for the CDSN, undergrads were largely an afterthought as we focused mostly on graduate students as research assistants and as participants in our events.  This hackathon gave us a chance to include younger folks in defence and security thinking, and we benefited greatly.  We shall see what our next Undergraduate Excellence Scholars seek to do, but we may be borrowing Alex's idea again and again, as this kind of creative thinking exercise was terrific on multiple dimensions.