I have less than a day left in Sydney and in Australia.  I head off to Wellington, New Zealand for the last part of my research trip--asking the Kiwis about their work.  Before I go, I get to meet a retired military officer to get some additional perspective.

So, what did I learn today? 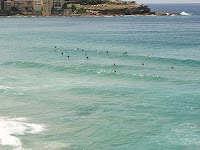 Finally, something I forgot to mention after the Ghost Tour the other night.  One of the group apparently had a Ghost App for his iphone to measure ghostly emanations.  So, there really is an app for everything.
Posted by Steve Saideman at 7:13 AM