As promised, today I am announcing the order for Tuesday evening's (and then some) of potential survivors our players will pick as we await the next episode of Lost.

But, first, a couple of announcements: 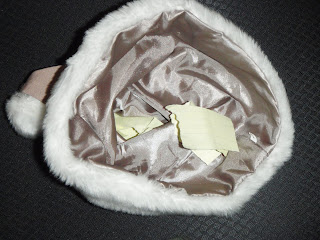 I decided to put all the names into a hat and then have Mrs. Spew pick.  Using excel's random number generator was fun, but kept changing so the choice of which run of numbers would have been subject to my bias.
The sorting hat to the right is, yes, an elf holiday hat, but of desert camouflage coloring.  And I got it in Kandahar.  Just a bit of trivia to delay announcing the draft order:

Again, if you cannot be online Tuesday evening at 9pm EDT, then submit a list (of 40 names or so in your preferred order)  to me via email.  And Chip will be on the clock as they say at 9pm.


I can imagine that at the end of the series, we may have a tie.  I propose the following tie-breakers, but am willing to take suggestions.

***  Tiebreaker #1:  Who is the mystery player?  First person to give me the right answer wins.  If that person reveals him or herself before a correct guess is sent to me, then we move on to TB #2
**** Tiebreaker #2: What should be this fantasy league's name?  Whoever comes up with a name I like gets this tiebreaker.
*****Tiebreaker #3: What is the best team name (and, yes, I am the judge of that one)?
Posted by Steve Saideman at 2:50 PM

I am guessing BS. Damn, now I actually need to take this seriously.

Alright #2!. And, my you are taking this quite seriously--I'm impressed.

How about Team: "Quantum Humer"?