Today was another pretty amazing day in paradise!  I have not been blogging as I have been very busy and very tired, but I thought I would post what I learned today.

I learned there are two kinds of lava: a'a and the other kind (the former is the darker, rockier; the latter is the smoother, river-ier [front and back in this pic]). 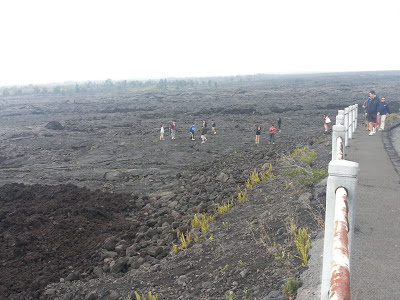 I learned that Kona pie has disappeared from Hawaii's dessert menus thus far. And that is very sad.  I enjoyed it (graham cracker crust, kona coffee ice cream, stuff) greatly long ago.... but so far, no find.

I learned that there has been much lava flowing since we were last here.  The spot where the lava crossed the road (not unlike the chicken) is now much more encased in lava than 20 years ago.

I learned that we could not see as much of the main caldera (volcano crater) as the old viewing platform got crushed by flying rock.  Plus the clouds of sulfur gas make that part of the area un-wise for tourists.   Well, closed for tourists.  Despite understanding that volcanos are all about change, we were quite surprised to see geologic/geographic realities changing since 20 years ago.  My wife realized that our marriage is older than the rocks we desperately tried to hold back: 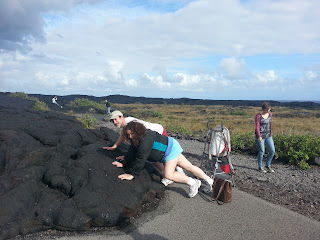 We learned that the Saddle Road is not even a little bit treacherous.  Sure, some fun curves at first but mostly just an interesting drive through the island between mountains and through so many micro-climates.

Oh, and you can tell the locals vs. the tourists--the former drive at or below the speed limits.  the latter?  Not so much.