The old phrase is the more things change, the more they stay the same, more or less.  Well, I resolved via a twitter that in 2013 that I try to do a better job than the US government of matching commitments to capabilities.  What does that mean?  Well, as I blogged in early 2012, grand strategy is all about committing to do what one can do and no more or adding capabilities to match the commitments one has made.  The entire sequestration debate (I hate fiscal cliff as a phrase) has pretty much ignored that the US must consider revising its commitments so that it can spend less on defense.

For the personal side of this, I have been accumulating commitments so much that I am way behind on my next book (due at the end of 2012, oops!).  For the academic, the major capability restraint is time.  So, I need to figure out a way to stop saying yes to cool projects (such as going to Scotland next fall to predict the various dynamics of the 2014 referendum) since there is no way I can add time (the US could deficit spend a heap more and keep the defense budget where it is--with some consequences) as I do not have a time-turner or any other time travel device.

Perhaps returning to winter late tonight will mean that I have more time than I have had the past ten days or so.  To be clear, I am pretty sure my priorities, which have meant reduced blogging over the holidays, have been in the right place: 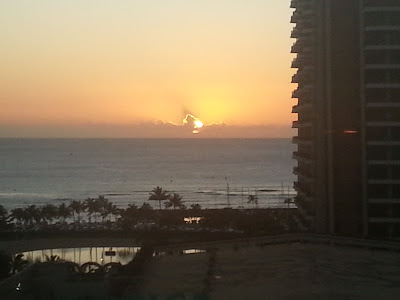 Happy New Year to all, and as I wished last night: may all your resolutions be easy or irrelevant!

Posted by Steve Saideman at 1:43 PM

Was that pic taken from the Hilton?

Get ready for the amount of snow when you get to Ottawa. Hopefully, you have a snow removal service that dealt with your driveway.

Yes, our hotel room at the Hilton Hawaiian Village had an awesome view.

Yes, we have a decent but not great snow removal service so we could get into the house. Our bags didn't make it so we didn't have to drag them through the snow.