I always root for USA in World Cup games, and have watched probably more USWNT (the women) than the men ... because I am a sucker for a winning team, I guess.  Anyhow, I am mighty jazzed as my gamble has played out.

This year's Women's World Cup is in Canada with games in Montreal, Moncton, Winnipeg, Edmonton, Vancouver and ... Ottawa.  The semis and finals are elsewhere, but one of the quarterfinals would be in Ottawa, so when I was choosing to buy tickets, I went with the quarters rather than the round that is playing today/yesterday/tomorrow.  I figured with four games, the chances of getting US or Canada would be pretty good.

And thanks to tonight's effort, I get to go the game with a relative and friends to see USA vs China: to determine whether the declining hegemon or the rising power have what it takes to go further.

The rest of the games also have fun IR implications:
Still much fun ahead.  The world has caught up to the best teams, so the teams that could romp before have tough games ahead.  I will enjoy the game on Friday, Win or Lose Win! 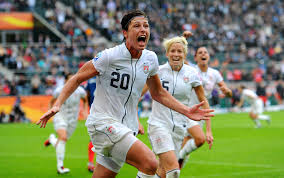