Surveys and Realities of NATO's Past and Future: Fun with Numbers

I got into a fun conversation with Roland Paris (@rolandparis) on twitter today about the survey that came out last week that raised questions about the commitment of much of NATO to the heart of NATO: an attack upon one is equal to an attack upon all.

Despite my post last week where I concurred with the survey that NATO has a weenie problem, I pushed back a bit.  Why?  Partly because of Dan Nexon's excellent post raising doubts about the survey--that if people were asked more directly whether they would want to help an ally if attacked by Russia, they might have answered differently.  And partly because I have been thinking of the lessons of Afghanistan--that every NATO ally (and then some) showed up even though no one cared about the place and nearly all stuck around until 2013-14 (Canada and the Netherlands as notable exceptions).

What really got me going was Roland's assertion that public opinion and willingness to fight in Afghanistan were correlated.  Really?  Because I have been saying otherwise for years.  I invoked both Sarah Krep's work and the Dave and Steve project plus this handy slide: 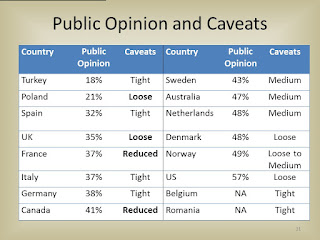 Sarah Kreps argued in her article that elite consensus kept the alliance together despite public opinion--that the elites of the various parties shared an interest in supporting NATO and were mutually implicated in the mission so that it could not be a campaign issue.  My take (with Dave) is that institutions mediate this stuff, so that public opinion only matters indirectly. I also mentioned that countries actually became more willing to fight as time went on and as public support fell.

The basic pattern of the slide above is that there is no correlation between public support of the mission and what the troops were doing.

Roland pushed back with a few slides of his own:

France is hinky in the chart, but let's focus on a few key things here.  First, what drives this is mostly the denominator as most countries had roughly similar numbers of troops (500-3000) with Italy, Germany, and the UK being above that and the US way above that.  Canada, the Dutch, the Danes, etc all have smaller militaries.  So, any effort they commit will be a larger % of their capabilities.  This speaks more to population size and % of GDP spent on defense.  Public opinion is not correlated much with this as UK had roughly the same percentage of support as Italy and Germany.  Moreover, the idea that size of contingent measures willingness to fight is strange in this case.  For most countries, each sent as small a continent as possible (to save money) and then reinforced once they found that their zones were hotter than expected, especially those in the south and east.  So, size of force is actually not just a function of will but of the risks chosen (that which shaped caveats also shapes size, more or less).

His next slide was of fatalities per population:

And, yes, the Danes led (well, once you discount the small Estonians) in how much they bled, with Canada second, UK third, US fourth.  What do they share in common?  Willingness to serve in south/east.  To repeat, casualties were a function of where one was willing to serve and how they served--caveat variance is what shaped the fatalities outcomes.


After I said that I had done some correlation tests and found none for caveats and public opinion, Roland's big move is to follow my instructions and build a two by two:

He chose to add the percentages of fatalities/population and Afghan commitment/size of military to get high or low on one dimension and public support on the other.  And it looks good for his argument--that UK and Poland were outliers with low/low and high/high serving as the primary axis of the relationship.  So, should I submit to Roland's argument?  Nah, that would make for a boring post.  I think there are a few key things to say about this two by two:
The point again is that NATO countries were willing to fight and die in a place that no one cared about, where Article V was only loosely attached.  NATO's history shows that its members dig in and stay resolved when the alliance itself is threatened--Bosnia 1995, Kosovo 1999.  If an ally were attacked by Russia (well, maybe not Turkey), it would compel each leader to ponder whether they want to break NATO and face a revanchist Russia alone.  Their publics might not be enthusiastic, but as Sarah Kreps would point out, the political vulnerability would be low if politicians across the spectrum agreed to the same stance.  Still, I have been and will continue to ask for real commitments of real troops and not just bases and based materials to demonstrate to both Russia and the allies that an attack on the Baltics would mean war between NATO and Russia.