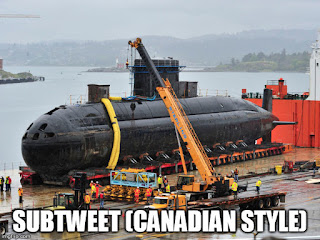 Punditry can vary widely in quality, and the realm of Canadian defence is no different.  Tom Friedman tends to cite wise cab drivers, which is the clue to the start of a particularly hacky column.  When it comes the Canadian defence sector, there are also some basic tendencies that, alas, can identify the writer as a hack.  That they are making assertions based on under-considered comparisons, traditional but unhelpful metaphors, and/or appealing to fears or simplistic nationalism.  To be sure, in all my blogging on Canadian defence, I have probably committed many of these sins.

As the new Defence Review is upon us, we are now being inundated with columns about what should or should not be included, whether it is already fully baked, and what we should be concerned about.  So, it is a good time to figure out how to identify a Canadian Defence Hack.


You might be a Canadian Defence Hack if you*:


I have collected this list of Rules of Canadian Defence Hackery from a variety of sources and am willing to expand it as I get more suggestions.  So send along any additional ones!

* Apologies to Jeff Foxworthy
Posted by Steve Saideman at 9:57 AM