Today, I attended an event at Carleton on NATO and the upcoming Warsaw Summit.  It was 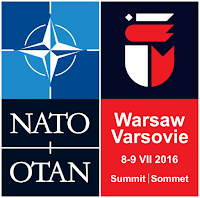 organized in part by Poland's embassy, as they are hosting the summit.  The Q&A was almost a ritual dance (kabuki?) with the usual folks playing the usual parts.  Before I get to the script, I do want to highlight what David Perry, CGAI frontman and successful PhD student at CU's poli sci, had to say:


that NATO is clearly not a major priority for this government. That he had to look far and wide to find anything about Canada's stance on the Warsaw Summit, and that the various pressures on defence spending suggest that if Canada puts more resources into peacekeeping (the middle level enlisted officers as well as staff officers), there will be less of those folks to "capacity" build in either Iraq or Ukraine.  Since he was the first to say less with less in terms of the Canadian defence budget, he has got some credibility on this.

Elinor Sloan repped Carleton well on the panel by criticizing the NATO Russia Founding Act although not being quite as blunt as myself.  Robert Kupiecki was the Polish rep, who has been organizing the summit, and did a nice job of juxtaposing the "southern front" facing NATO--IS and refugees--and the existential threat in the "eastern front."

Anyhow, the script of the Q&A for any NATO panel in Canada:
It was interesting to get the freshest perspective from Europe--that there might be some movement on doing more serious stuff on NATO defence but not to expect permanent basing even as some/many NATO members do more stuff in the East.

Highlight: I mentioned my concern about temporary basing possibly creating opportunities for a fait accompli if sequestration or austerity created opportunity for Putin to aggress on a weekend with no NATO forces in the Baltics, and Kupiecki mentioned that some mystery country x had to send its forces home after its troops worked more than 40 hours a week during a NATO exercise and had to either get overtime pay or vacation leave.  He did not mention that it was Germany, but it was, indeed, Germany.
Posted by Steve Saideman at 5:02 PM

Anybody complaining about the politically biased use of the term "secessionist"?