So Many Labels, But All White

I was listening to the Pod Saves America podcast on Charlottesville, and one of the speakers argued that the Alt Right is a thing since they are the white supremacists who consider themselves above and different from Nazis (swastikas are bad for PR) and KKK (we are not rednecks), etc.  Yet the Alt Right are clearly racist, homophobic, xenophobic, anti-semitic, and misogynist.  The broader label that applies to them all? White supremacist.  Sure, that glosses over all of the other hates they have, but all that stuff seems to travel together.

Anyhow, I made this to illustrate: 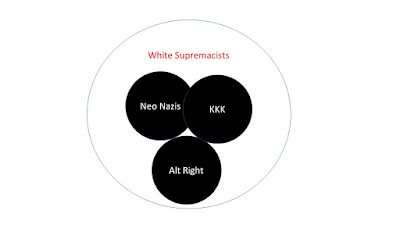 The Alt Right may be a separate group from the others (or not, hard to tell, as some Nazis wear khakis).  But they are all white supremacists, which means they all need to be confronted, mocked, and marginalized.  That the Alt Right folks may wear nicer clothes does not make them more acceptable.  That they are not rednecks does not make them more acceptable.  They are all ... deplorable. The key is not so much converting them, although there are folks who have been able to do that one on one.  The key is to make it politically painful for those in power or running for office to appeal to/play to these people.  The goal is to return them to the criminals that many of them are, to make them isolated and irrelevant racists rather than empowered terrorists and militias who are encouraged by the President and his party.

It will not be easy, and there is no one right way to do it.  Sometimes, it will mean turning the spotlight away, sometimes it will mean confronting, and sometimes it may mean, yes, violence.  I am not a pacifist so I can't tell folks to turn one's cheek as the Nazis swing their clubs.  I do think the best way for the most part is non-violence, but defense may be necessary at times.  Fleeing may be necessary at times.  But one of the core logics of ethnic conflict is that when the extremists are outnumbered, they tend to go away. Riots happen where the rioters of ethnic group x outnumber the other ethnic groups in that area.  So, the best way to deal with these folks is to show up.  But with the white supremacists being armed to the teeth, this can be hard to do.  So, I really have no ideas except to call out those who are white supremacists, such as: 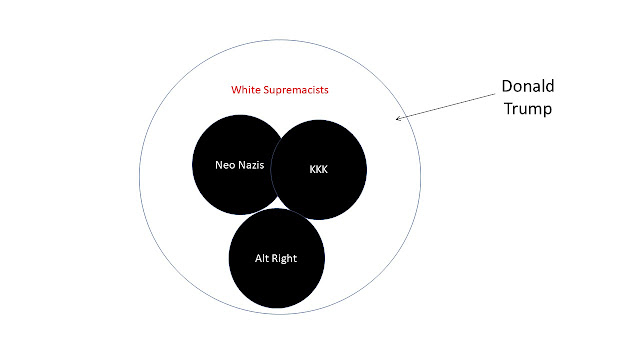 Posted by Steve Saideman at 2:59 PM