Well, if I have to have great interview and meh tourism or great tourism and meh interview, the former is obviously superior.  Today started with a meeting with one of my interpreters.  She is still in interpreter school, but is doing great.  Since she majored in strategic studies as an undergrad, she knows what I am looking for.  So, then we went to meet what I thought at the time would be the only legislator I would be interviewing.  My fixer found another one willing to talk to me--the challenge is that there are elections in June so folks are busy.

Anyhow, the interview subject du jour had only 30 minutes, but he filled that time with heaps of research goodness.  He had a copy of our questionnaire and was giving very complete answers while not filibustering us too much.  I just let him and the interpreter go back and forth rather than getting the interpretation and then asking follow ups since we had a strict time constraint.  I may end up asking more questions by email.   Anyhow, this interview was exactly what I needed, and South Korea may prove to be a very interesting case as it seems to be much closer to the US than to Brazil in terms of relevance of legislatures in civ-mil in Presidential systems.  Many more conversations this week and next to see if what I heard today is just one person's view or a good depiction.

Because I had few notes to transcribe and my interpre er had to take the recording and turn them into English for me, I didn't have to spend the afternoon transcribing.  So, I decided to do some tourism (the last bit of grading and such is for rainy days ahead).  Turns out Monday is a lousy day for tourism as I decided to go to the War Memorial.... which is closed on Mondays.  Dumb Steve.  The good news is that there were many interesting statues and hunks of military equipment to look at, including a B-52 bomber, a Korean made tank, heaps of aircraft and a lifesize model of a ship the North Koreans attacked.  See below for some pics 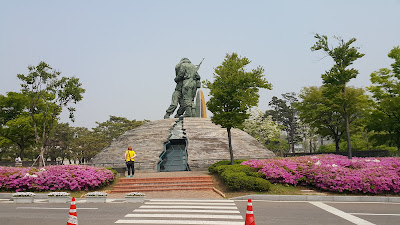 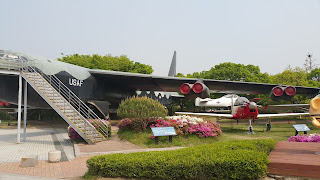 After this, I went to Namsan--the mountain in the middle of Seoul where there is an observation tower.  This as a mistake--it was hazy.  Yesterday, the skies were super-clear.  I should have waited for a better day but wishful thinking too over.  So, pics like this: 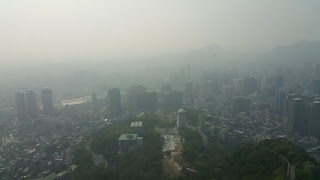 Oh well.  There were heaps of South Koreans putting locks on fences and elsewhere, lots of sweets and strange marketing.  Which led to this: 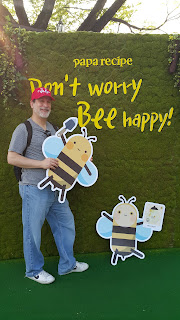 Oh my.  Tomorrow, no tourism as I have two interviews than a dinner with an East Asian security expert and my original fixer (too connected, so conflicts of interest kicked in, alas).

Anyhow, so far, so good.  I will make better tourism decisions when I have the chance... I hope.  Still have not figured out the restaurant scene here--Tokyo was much easier.

Posted by Steve Saideman at 8:36 AM