What Do I Think Before Going to Seoul

At the end of this week, I head off to South Korea to do the next case study in the Dave and Phil and Steve project.  The project is not about North Korea or nuclear weapons, but about how democracies oversee their militaries.  I am not an expert on nuclear proliferation or on North Korea, but as a scholar of international security, I am sure I will be talking about and thinking about the current crisis as I wander along. So, I thought I would write now about my views on the upcoming summit and the various declarations before I go since it might be fun to compare with my views after I come back--I might learn something or change my mind (or not).

The latest news is a declaration by North Korea about ceasing tests and possibly de-nuclearizing the peninsula.

We should be thrilled how far Kim Jung Un has come, right?  Um, I am not so sure. The experts I follow on twitter largely suggest that the unilateral decision to stop testing nuclear bombs and missiles may be less driven by a desire to reach an agreement with the US and more a realization that the North Koreans don't need to test more--they have reached a level of satisfaction with their weapons programs.  Instead, for KJU, this upcoming summit may be about recognition as a nuclear power and an effort to divide the US from its allies.

Which has me thinking about what happens at the summit and after.  I see three possibilities being most probable: 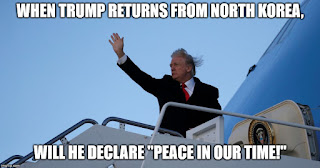 I absolutely do not believe that North Korea will give up its nuclear weapons and its program.  This has been something the country has been working on for decades at great cost and with much face involved.  Nothing that has happened recently would suggest this is a good time to give them up.  Indeed, recent events suggest otherwise: Russia's intervention in Ukraine, what happened to Iran's Hussein, Libya's Qaddafi, Syria's Assad, and, oh yes, the apparent refusal of Trump to take yes for an answer vis-a-vis Iran.  So, that colors how I think about the possibilities.

I think (1) is likely because of my assumption in the previous paragraph--that NK will not denuclearize.  North Korea issuing statements now that might lull Trump into high expectations is a very dangerous game, but North Korea has extracted much from the US and its allies over the years via the making of false promises.

(2)  Might seem to be pretty good trade--that Trump gets America First to become policy--fewer allies, one less crisis, woohoo?  It would shake American allies around the world, as the US sells out South Korea and Japan even as South Korea goes along since being the battleground for Trump's war is much less desirable.  People have raised questions about whether Trump can unilaterally abrogate the treaty between the US and South Korea.  Unless Congress acts, Trump could withdraw American troops, and how likely is it that Congress would act?  Would Mitch McConnell actually schedule a vote?  Probably not.  It would take much time to withdraw American troops from South Korea, so the process could get interrupted, but I could see the US pulling out and then North Korea cheats on the deal.  What then?
From the North Korean perspective, the threat of American nuclear attack does not end with the pullout of troops from South Korea or even the withdrawal of American ships and planes from East Asia, so, again, what does denuclearizing mean?

(3)  Trump lies about everything, so he could say he got something out of the deal even if it is mostly meaningless.  Then, Bolton can encourage him to go to war against Iran since that is the most preferred war by his kind.  Crisis averted?  Woot?  I guess this would be the best outcome--a Korean war would be much more devastating on all levels than an Iran war.  But then what happens when it is clear that the Emperor has no clothes and his deal is empty?  Given Trump's shamelessness, maybe nothing.

Anyhow, I don't see any other possibilities right now.  I am thankful that there is going to be a summit--mostly so that I can go to Seoul for two weeks, get some interviews and come home before a war starts.  But for the world and for regional peace and security, I see nothing good coming out of it.  Maybe two weeks of living in the shadow of the DMZ and of North Korea's nuclear weapons will change my mind.  Look back here in mid-May to see if I become more optimistic (I could not be much more pessimistic).

Posted by Steve Saideman at 9:03 AM