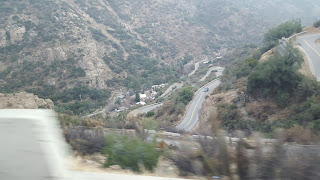 Today, I survived the more than 50 hairpin turns up to Valle Nevado and then down... because I was not driving.  Definitely the most challenging drive to any ski area I have experienced.  I was told that it might be crowded on a Sunday, but I can't imagine that many cars braving that drive.  And nope, it was not very crowded.  The only crowds I faced were in the restaurants as folks spent more time in them watching the World Cup games.  No lift lines of any length, the slopes were rarely crowded at all.

I observed much along the way, and I was also reminded of my Ski Beliefs or Skideology.

The tourist company picked me up and dropped me off at a staging area where many of the others were getting ski clothes--coats, pants, boots.  I brought enough gear that I didn't need any--I had hoped to rent a helmet but that didn't work out.  Then we got into a set of buses and went to the slopes.  Valle Nevado is very close to the city of Santiago--as the crow flies.  But as the car drives, it requires a lot of careful driving, so a 15 mile drive took an hour.  Which was fun, because the linelessness meant getting plenty of skiing in.  On the drive, we did pass some protest banners since some folks are not fans of  the mining going on nearby.  It also reminded me of the movie about the 33 Chilean miners who had to be rescued after a mine collapse.  On our DVR, and now I need to watch it. 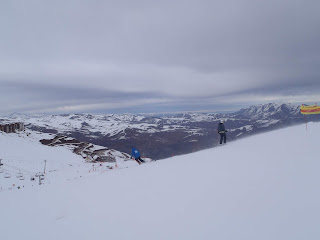 While I have skied at places that had some terrain above the treeline (Whistler, Copper, Lake Louise), I think this is the first time I have been at a place entirely above the trees.  Runs are marked by colored poles---green for beginner, blue for intermediate, red for advanced and black for expert.  Red was new to me--I had not seen that category before.  I ended up on a number of red runs, as they were really what I think of as blue runs.  Sometimes a bit steep or a bit narrow but rarely both and never bumpy (old knees and bumps are not friends).  The greens were fun as were the blues.  The reds were mostly fun, but the morning conditions of ice and hard pack made them a bit less enjoyable.  The afternoon snow meant for softer conditions, but sometimes not so visible ones.  I ended up falling as I approached a chair lift as I missed where the path was and sailed down a more direct and less groomed way.  No harm done.  I laughed.

I managed to Samba but not Tango---some runs were named after various dances--as the signage was inconsistent.  Another surprise were a few chairlifts that had conveyor belts that one would stand on as the chair came at you. Which reminds me of my Code or Ideology:

Posted by Steve Saideman at 8:38 PM