Jim Golby and Peter Feaver have a super-interesting piece at the Atlantic on what a deal with the Taliban might mean for US civil-military relations.  They were smart enough to ask questions in an experimental fashion this summer about attitudes about a potential end to the Afghanistan war--victory or defeat.  The timing is fantastic, as the US is currently working on a deal with the Taliban.  That deal may be quite problematic--a post for another day--so their survey is really quite prescient by asking different people similar questions but with additional info about a potential victory or defeat in Afghanistan.  For application to the current situation, one can imagine the deal going in either direction, selling out the Afghans to the Taliban in exchange for the US getting out or getting a peace deal with the Taliban share power with the Afghans we have supported and denying the place as a base for terrorism.

The basic findings are straightforward
The big punchline is that leaving in defeat has different impacts on civilian and veteran attitudes about the military and civilian leaders.  That a defeat would deepen the divide between civilians and military folks (vets and those in service).  In the experiments:
Note the pattern--the veterans give more of the responsibility for victory or defeat to civilians, and civilians tend to give more of the credit/burden to the military. In either victory or defeat, there would be divisions about who gets credit or blame.  This opens up an interesting research agenda--why do military folks think the civvies are responsible and vice versa?  This article does not explore that finding, but perhaps their forthcoming book does.

Of course, I had to raise a question about one key aspect: that 75% of civilians and 90% of the veterans expressed confidence in the military, sans experiment--is this too high?  In most democracies these days, the citizens have more confidence in the armed forces than other institutions, and this makes some sense.  Unlike most other institutions, such as the legislature, the executive, the courts increasingly, the media, the armed forces are not seen as partisan.  That is a good thing.  But the whole "support our troops" mantra may cause folks to be less critical of the armed forces than they should be.

While much of the blame for the forever wars rightfully should go to the civilians that put the militaries into difficult spots, the various armed forces have not always performed brilliantly.  We saw the US military subvert the intent of the President who wanted population-centric war while the Marines went to Helmand instead.  We saw a German colonel order an airstrike despite not having eyes on the ground, which led to more than a hundred Afghan civilians getting killed.  Not one, but two prison breaks took place while the Canadians were in Kandahar.  I can go on, but the major point is this: the armed forces of the US and its allies have had mixed success in the forever wars.  Maybe we should not be quite as confidence in their competence?  Or at least, maybe we should be asking questions, even if the answers ultimately lead to a clearer understanding of how outstanding they were. 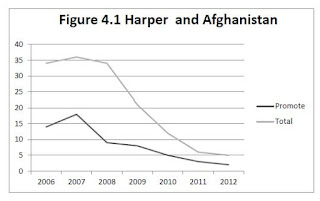 PS  I have a quibble--they state that Obama didn't talk about Afghanistan.  They cite a previous Feaver piece to support that, but that piece has no numbers to show Obama talked more or less about Afghanistan than Bush did, especially Bush after 2005.  I did count Harper talking about Afghanistan over time, which showed some interesting patterns in Adapting in the Dust.