Ok, this is not a quiz but a series of reactions to this pic: 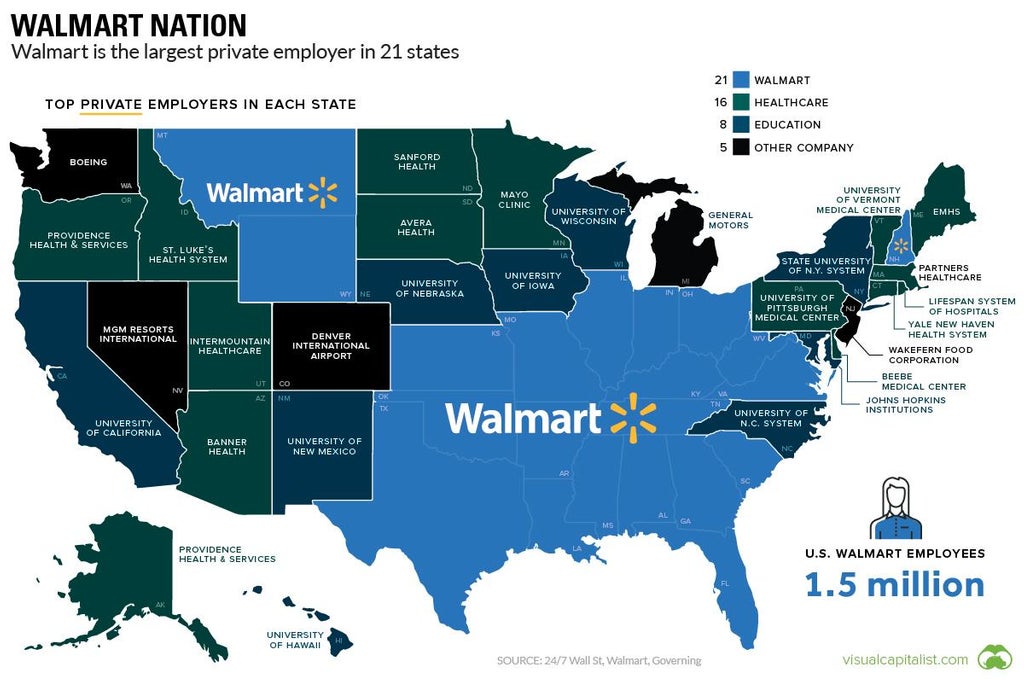 A few obvious patterns here.  Of course, the Walmart of it all.  What does it say that Walmart is the biggest employer for 21 states?  That they have done a great job of wiping out the competition, I guess.  Mostly red states plus Illinois and Virginia.  Hmm.  Lots of correlation/causation possibilities here.

Let's come back to this, but focus on the other trends:
Back to the big picture, that the biggest employer in nearly half the states is the one that is best at destroying smaller businesses, best at paying low wages, and feeds a small overly rich and right wing family might help to explain a lot that is broken about the US political system.  Just as every election is "about the economy, stupid", we need to take seriously that the structure of the economic system deeply shapes the structure of the political system.  One can look at Walmart's dominance in two ways:
When people talk about Blue and Red states and that some states are Red forever, this map makes me think that this is not inevitable.  The question is: how to get folks in the Red states to realize that they are being exploited?  Shouldn't they want more secure health care?  Shouldn't they want a better wage than Walmart has to offer?

To be sure, this map is deceptive since it is of largest employers and does not tell us about percentage compared to the rest of the state's population.  It may be that Walmart employees are actually not that big of a voting block in many of these states (Texas?).  Indeed, only 1.5 million employees--a lot for one business, but not that big of an electoral constituency.

Just something to think about on a Saturday morning rather than reading graduate student work or reviewing a journal article.