Well, I vote for sore losers.  In response to this: 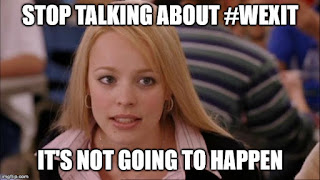 I was told that Alberta is deserving of self-determination like the Basques, the Catalans, Tibetans, and the Scots...  And, yes, I scoffed.  Three of those four developed separatism when the central regime was autocratic.

So, I dipped into my past as a separatism scholar and pondered whether Alberta has any of the characteristics shared by the others:
The answers here are clear--Alberta would fit into the "one of these things is not like the others" category.


So, until Albertans are facing serious discrimination/exclusion, I shall continue to scoff at the idea of Albertan separatism.  This kind of stuff happens after an election--we call it being sore losers.  Next time, maybe don't make someone so lame as Andrew Scheer as the leader of the national party that can't get much support outside of one's bastion...

Posted by Steve Saideman at 5:08 AM

as you know, identities are socially constructed. On several occasions when I've been abroad in some kind of group activity (study tour, employment), I've encountered a Quebecois and an Albertan. Guess which one refused to shake my hand, because I'm from that quintessence of evil, Ontario?

The sense of grievance is very really, even if the origins of it are lost to the mists of time for many. If you can find an Albertan over 80, they will talk about how the Eastern banks took their farms during the Great Depression (never mind local banks in the US foreclosed on millions of farms in the US at that time.) An ancient Albertan will recall during the Depression when the Social Credit government tried to enact the Social Credit platform it was elected for by issuing "Prosperity Certificates". The feds called it issuing currency, fought in in the Supreme Court, and won.
When Trudeau pere enacted the National Energy Policy, Albertans sported bumper stickers that said "Let the Eastern Bastards freeze in the dark."
There was also a subsidized freight rate for grain, called the Crow Rate. It was a third rail in Canadian politics for decades. It was regarded as a sacred right. I think it was finally abolished in the 80s.

re: distinct culture, some famous scholar of political culture explained the difference between Alberta versus the far more socialist Saskatchewan and Manitoba, by noting that Alberta had disproportionately more immigrants from the US, rather than Europe.

You are absolutely right to note that, unlike Basques and Catalans, Albertans have had the right to self government since they joined Confederation (1905 I think?). Separatist sentiment may be a useful ember to fuel if you are an Alberta premier who wants a stronger hand vis a vis the federal government.