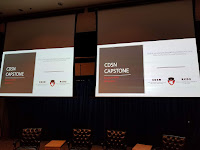 This week we got to realize one of the CDSN's proposals, and it was a pretty great experience.  One of the challenges of building a defence and security community in Canada is that the country is pretty big.  Which means that all of the conferences that take place tend to resonate locally but not much beyond that.  The idea of the Capstone is two-fold--to amplify our partners' events so that they reach wider audiences and have a lasting impact and to elevate the best that Canada has to offer as part of our mission to foster the next generation.

So, we brought eight scholars to the Canadian Forces College in Toronto from across Canada, people who were nominated by the organizers of the various conferences--Women in International Security-Canada, Defence and Security Foresight Group, the Kingston Conference on International Security, the Inuit Studies Conference, the Combat Training Centre/Gregg Centre Annual Conference, and the Inter-University Seminar on Armed Forces and Society-Canada.  Ok, we brought six as two were waylaid by the COVID-19 epidemic, but they were able to present via skype.  For bios and more info (and ultimately some links to their work), go here: https://www.cdsn-rcds.com/2020capstone.

All eight presentations were engaging, thoughtful, and important, addressing: the dynamics of rebel funding and governance, the use of the internet by ISIS, the role of gender in rebel group/govt dynamics, the challenges the US faces today to compete with Russia and China, what is Canada to do amidst that competition, how the Canadian media covers the arctic, how to target covert networks, and attitudes in the Canadian Armed Forces about the efforts to address the problems of sexual assault and harassment.  In some ways, the topics were all over the place, but in many ways, the papers engaged in others in interesting ways.  I will be posting the link to the streamed event here when it is available.

So, here are our 2020 Capstone Laureates (from left to right starting with the skyped speaker): Mathieu Landriault of Trent, Rachel Schmidt of Carleton, Rachel Babins of Toronto, Tanya Bandula-Irwin of Toronto, Victoria Tait of Carleton, David Hofmann of New Brunswick, and James Anderson of Queen's.  Ali Wyne of Rand spoke in the first session via skype. 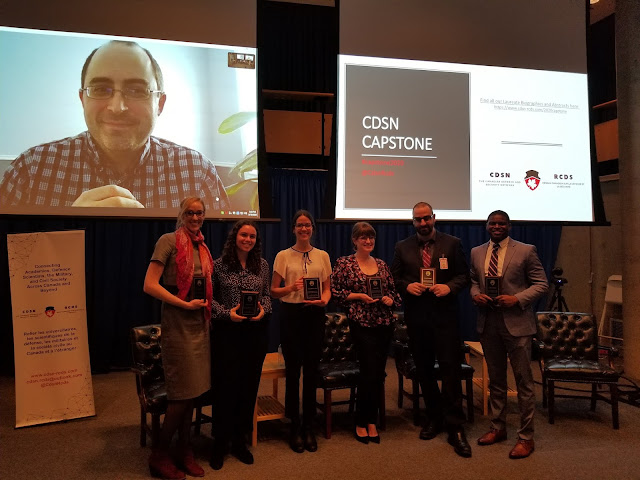 I am very thankful to the folks at CFC, especially Melinda Mansour and Mike Lyons for doing all of the heavy lifting in Toronto.  Jeffrey Rice, Melissa Jennings, and Alvine Nintai of the CDSN HQ did all of the planning, budgeting, arranging, and social media-ing.  I am very proud of my team and very grateful to all of the CDSN partners who helped make the inaugural CDSN Capstone event so successful and special.

And, yes, we declared success via food and drink: 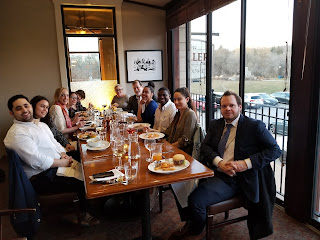 If you are running an event in Canada in 2020 on defence/security stuff, and you have someone you want to recommend, send your nominations for the next set of Capstone Laureates to me.
Posted by Steve Saideman at 11:43 AM