To celebrate International Women's Day, I am posting pics and slides from yesterday's Women in International Security-Queens conference, and discussing what I learned and what I presented.  This event is largely run by female undergrads at Queens, yet it was a pretty high power event.  They got the Deputy Minister, Jody Thomas, Mercedes Stephenson, the Ottawa bureau chief for Global, and Senator Marilou McPhedran as the keynote speakers--all were most impressive and interesting.  I live tweeted at #WIISQ, so I will not repeat all of what they said, but I will hit a few highlights before summarizing what I said during my presentation. 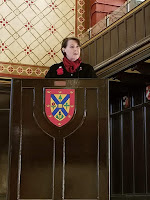 Senator Marilou McPhedran was most impressive as she was able to bring feminist IR theory, such as Cynthia Enloe, to the implementation of UN Resolution 1325 on Women, Peace, and Security.  I loved her conclusion--that outrage is good and necessary but that it needs to be combined with strategic direction.

Jody Thomas was much more interesting today, presenting her story than earlier in the week at the CDAI conference, presenting the Minister's message.  Tis only natural and inevitable.  I found her 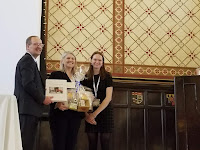 discussion of Canada's role in fostering the Jordanian Female Engagement Teams (units of female soldiers designed to engage the other half of the population).  Just as the Western countries learned that they needed women to talk to women in the Muslim world, so do the countries of the region.  I also found Thomas's story--her father, the commander of the Navy, discouraged her from joining the Navy because she should only join an organization that she could ultimately lead--most interesting.  I noted on twitter that the Deputy Minister job is a wee bit higher than the commander of the navy*--so she did alright.  She referred to the students in the room as being beacons of hope, but I am pretty sure that they saw her as being pretty beacon-y.  I also liked her line about failure not being an end-state, but being a part of the growth process. The key insightful line is that men tend to have sponsors, but women tend to have mentors.  This was very striking, and I need to think about it some, but the general idea is that men getting help from senior folks is normal and expected, whereas women getting assistance may be seen as unfair and unmeritorious ways for women to get ahead. 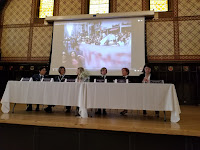 The next panel featured four senior female officers--a pilot, a doctor, a lawyer, and a general--along with #BattleRhythm co-host, gamechanger, and inspiration for all of these young women Stéfanie von Hlatky.  The panel covered a lot of territory, as each discussed their experiences.  They were, indeed, a group of badass women, and proved to be most inspiring to the audience (male and female).  I got to talk to a few of these officers before and afterward.  Most impressive. 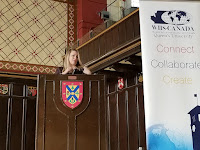 The last session was a talk by Mercedes Stephenson (I am skipping chronological order since I have more to say about my talk and panel).  We plan to have present her at the CDSNSummer Institute in August, and I am feeling even better about that plan after hearing her speak about her experiences.  I hadn't realized that her degree was in Strategic Studies (thanks Bercuson!) and not journalism.  She was at the Pentagon the same time I was, so it was very interesting to hear her perspective of that time and place.  She pushed through opposition to her going on a trip to Afghanistan--that her presence would have disturbed the chemistry of the guys.  Oy.  She still gets a ton of grief online for being a woman daring to be smart on TV.  She presented the usual advice--stand your ground--and unusual advice--a door wedge is great for hotel rooms when folks might give away keys to your room.  She also had good advice for how to detect fake news and Russian trolling.  She noted that the CAF responded quickly to her request for info, which allowed them both to deflate an effort to pass a bit of fake news, whereas the RCMP, by resisting calls to be transparent, gave space for Russian trolling to succeed.

I was on the next panel with Yolande Bouka of Queens, Jeffrey Rice of the CDSN (and of Macewan starting July 1st), and Lindsay Coombs of DND.  Lindsay helped to create WIISQ, has been a rockstar in the various defence circles, and is now working on her dissertation while working at DND.  I was the oldest on the panel by far.  My colleagues on the panel talked about their work--Jeff on protection of civilians in Afghanistan by UN/NATO, Yolande on women in non-state armed groups, and Lindsay on the larger effort to develop norms regarding child soldiers.

I was very much the outlier as I don't do work on gender.  So, I decided to talk about what I have seen over the course of my career--much progress but not enough damn it (the latter was inspired by many conversations with Kid Spew, Teen Spew, and, now, Adult Abroad Spew).

I started by discussing being an ally thanks, in part, to this tweet:

Great thread. Thank you Steve...as I said before thank you for always being an Ally. Men being allies is key to achieving gender equity. Not enough to ‘lean in’. Hugs!!!
— Bessma Momani (@b_momani) March 7, 2020


I joked that as a scholar of alliances, I know only too well that allies can be quite reliable or quite unreliable.  I then noted a bit of discomfort with the term since my intention was always to be a decent human being.  I sometimes have fallen short of that, but that has been the goal.  That it has made me to be viewed as a good ally says something quite sad actually.  Although I will take the compliment in the spirit it was given. 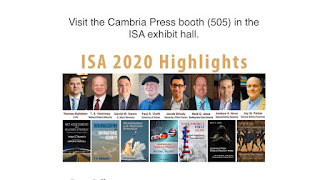 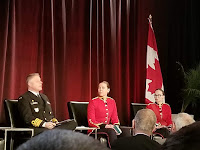 I then relayed what happened earlier in the week: that the head of personnel, a three star admiral, was grilled by two female cadets at the big Ottawa conference.  The highlight for me was when the admiral was wondering why men tended to suggest that women get promoted to key roles because of their gender and not because of merit, and one of the cadets suggested that it might be to due to the culture of the organization.

Which was a nice seque to discussing my career, going from a spot where there were few women taking hard security classes to working at a place that is quite diverse.  So, woot, progress.

And then I discussed how there are not enough women at the higher ranks, explaining the leaky pipeline with much help from Sara Mitchell.  I quickly mentioned my blog post where I was challenged to list the senior women of color in IR in the US and Canada and found about ten names.  Which means few mentors/role models. 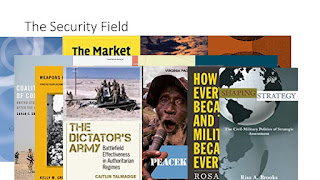 I then did suggest there was much progress in the security field by highlighting the books written by so many sharp women: Kelleher, Avant, Weitsman, Jenne, Toft, Talmadge, Greenhill, Goddard, Fortna, Kreps, Chenoweth, that von Hlatky that keeps showing up, the Brooks non-sisters, just to name a few.

But sexual harassment is still a big problem with universities focused more on protecting themselves than their students.  I highlighted the need for collective action, which is where student organizations can come in. 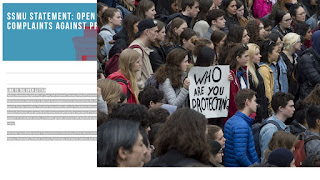 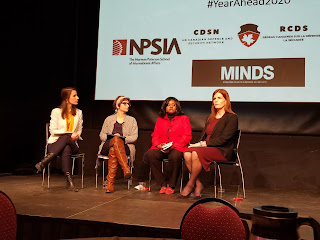 I concluded with a discussion of what the CDSN is doing as one of our goals is to foster a more inclusive, diverse next generation.  I highlighted how many women are in our leadership team (about half).  I mentioned our diversity/inclusivity fireside chat with Shawn Skelly of Out in NationalSecurity and Bonnie Jenkins of Women of Color Advacning Peace and Security--WCAPS.  That we have a WIIS-Canada for women, but no equivalents for other groups, which is why we brought organizers of such American organizations to Canada to hopefully inspire similar efforts here. 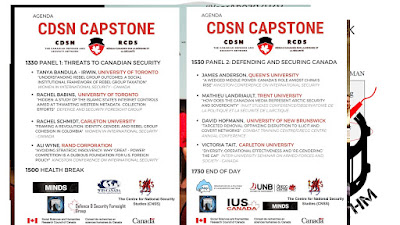 And then I promoted ourCapstone event which is on Tuesday in Toronto.  The idea is to present the best of 2019's presentations from across Canada on defence and security and bring them to one spot to amplify our partners' efforts and the individuals.  And funny, it was not hard to come up with a group of sharp people that is a wee bit more diverse than Cambria's ad.

I really enjoyed meeting both the women who spoke and those in the audience.  While my talk was about the progress, obstacles, and regression for women in the defence/security space, I am very optimistic about the future.  That these young women are the future, just as I used to say that Stef vH was the future of Canadian defence studies (she is now the present).  So, yeah, the future is mighty bright.

*  No, the Navy chief is not under the Deputy Minister, but he is under the CDS who is parallel to the DM.

Posted by Steve Saideman at 3:52 PM