The International Studies Association schedules its conferences up to a decade ahead of time.  So, I spent most of the 2010s looking forward to the pair of meetings in Honolulu and Las Vegas.  The former was cancelled just as the pandemic started to hit North America, and the latter became a virtual event that happened this week.  Yes, I missed the opportunities to enjoy such fun albeit very different places.  But mostly I missed the people, old and new, that I would get to chat with, listen to, learn from, and be inspired by.  I do not go to a lot of panels in a normal ISA year, spending most of my team in meetings with individuals and small groups.  The past several years, I made a deliberate effort to go beyond meeting my former students and former colleagues and co-authors to meeting junior scholars and scholars from groups with whom I have had few contacts.  This year, none of that is happening.

A virtual conference is like a conference in one's hometown but worse.  When you go away to someplace (nice like Honolulu or, um, less nice like most of the ISA's lineup for the next eight years or so, sorry Baltimore and Columbus), your focus is entirely the conference.  When a conference is in your hometown, you have to trek to the convention center but going home each night means often not taking part of the later receptions and hangouts and maybe early stuff, depending on one's commute and homelife.  When it is virtual, mostly the regular schedule does not change much and one squeezes in the panels amid one's schedule.  I had to re-arrange one class to meet before and after today's Junior Scholar Symposium for which I am a discussant.  Ordinarily, I would just re-schedule the class.  This year's ISA is just a handful of panels and nothing more.  There are no one-on-one's with new scholars or with old friends, no meet-ups with teams of co-authors to conspire on grand applications, article revisions, and book plans.  There are no receptions (ok, there are, but who is going?) to hand out Duckies and meet people.  This is the conference without networking.

There were debates years ago at the Duck of Minerva about networking--how to do it, whether it is necessary.  For many of us, there is no debate--we need each other, we do better with each other, doing this stuff entirely alone gets old.  So, yeah, I hope this is my last virtual conference, but I am guessing I have at least one more--the American Poli Sci Association that is supposed to be in Seattle in September.  I am not sure I will be able to cross the border then.  I know that this is in some ways more equitable--that it does not cost participants as much as flying and hanging out in an expensive city, and it certainly is better for the environment.  But it isn't the same.

I ran an informal survey on FB page asking if people went to many more panels besides those that they were on, did they go to receptions, did they arrange for one-on-ones or small hangouts.  Nope, nope, and nope were the modal answers.

So, what did happen at this year's ISA?  I can only speak about the stuff in which I was a participant.  My first panel was one that was on Comparative Civil-Military relations.  Michael Robinson (West Point) presented the results of the survey that he, Takako Hikotani (Columbia), and myself were working on for quite some time.  We finally launched it in Japan last month, and got some cool results.  The Japanese do think that the Diet both should and does have the primary role in overseeing the Self-Defence Forces, which is an interesting finding given that my research in Japan indicates that the Diet is one of the lamest legislatures in terms of doing oversight over the armed forces.  It may be that we differ on what oversight means.  It turns out threats don't impact oversight in Japan the way we might have thought.

Jessica Blankshain and Lindsay Cohn of the Naval War College presented an interesting survey and experiment about American attitudes about the use of coercive power by the military in the US.  It turns out Americans are not fans, but partisanship matters.  David Burbach and Naunihal Singh also of the NWC presented a survey of a number of African countries and attitudes about the militaries and roles they play.  Christina Gregory, a grad student finishing up at UC Riverside, presented a really interesting paper about the military in Lebanon--how do armed forces get reconstructed after civil wars.  Erica de Bruin (Hamilton) and Risa Brooks (Marquette) provided very helpful and insightful comments.  I learned a lot from the other papers, and we got good feedback as we try to figure out what we discovered.

On the second day, I was part of a roundtable on Canadian Foreign Policy in the 2020s despite, well, not really writing or studying CFP.  I spoke first so I focused on the difficult years ahead--uncertain where the US will go in 2024, a bellicose China, a military distracted and divided over its own personnel problems, and a government that does not really care much about foreign policy.  Andrea Lane (CFC), Justin Massie (UQAM), Edward Akuffo (U of Fraser Valley), Brian Bow (Dalhousie), Elizabeth Smythe (Concordia U of Edmonton), and Kim Nossal (Queen's) gave their far more informed and studied opinions.  We varied between optimism and pessimism, focusing on domestic dynamics (we are kind of screwed with immature parties) and international dynamics (we are kind of screwed by uncertainty).  We got a good crowd and got some good questions.

My third panel was a roundtable honoring Marc Trachtenberg as the International Security Studies Distinguished Scholar of 2021.  I got the role of chair as I chaired the committee that selected him.  I had never met Marc, but I had read his stuff.  It was always interesting and often contrary to the poli sci arguments on the issue.  The panel had Security gurus Monica Duffy Toft (Tufts), and John Mearsheimer (Chicago) and former students Frank Gavin (SAIS), Brendan Green (Cincinnati) and Galen Jackson (Williams).  I have only gone to a few of these celebratory roundtables, but I will try to go to more in the future, as it was funny, moving, and enlightening.

Today, I participated in the Junior Scholar Symposium.  This is a relatively new initiative, where small groups of junior scholars meet with a senior prof or two and we have an intense conversation about their work.  Often, junior scholars on normal panels can get ignored as people focus their attention on the bigger names.  The JSS is an effort to offset that potential dynamic.  The assignments are sometimes on target and sometimes random.  This year I shared the discussant role with Movindri Reddy of Occidental to talk with a group of younger scholars whose work, alas, has nothing to do with my own.  I tried to provide the best feedback I could.  I was impressed by all of them--Daniel Rodriques of Universidade Autonoma de Lisboa, Saskia Postema and Jan Melissen of Leiden, Dmitry Chernobrov of Sheffield, and Alina Dolea of Bournemouth.  Ok, the last presenter, Alina is working on diaspora so I had something to say about her stuff.  I like doing this JSS stuff as it is great to see what the latest generation is studying and to feed off of their nervous energy.  But a real weakness of this year's ISA is that they made the panels shorter (a good idea in a zoomed conference) but didn't change the number of people on panels.  So, we had far less time to engage, follow up, answer, etc.  And the portal sucked for getting audience involvement. 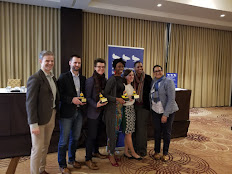 To be fair, ISA tried hard.  They created a Slack to provide some community and help, and that kind of worked.  Lots of people didn't know how to use it, most probably didn't sign up, but people did introduce themselves and did get help they needed.  The trivia games and other stuff probably helped some people.  The business meeting I had was not as fun or as tasty as they usually are, but was mostly the same.  I asked my friends on facebook what they did--did they go to more panels than the ones they were on, did they go to receptions--and the answer is not really.  I think one of the early signs I should have noticed is that the Online Media Caucus, a group I helped to start and one that is, well, adept at online stuff, chose not to do a reception this year.  I think they got it--it ain't worth it.  Next year?  Duckies in Nashville, please!

I am glad ISA 2021 was not cancelled.  I learned much (which is why I got into this business in the first place--my curiosity), I met some new people despite the problematic platform ISA used, and I got to connect for a bit with some friends.  It was better than nothing, which is what we got last year, but wasn't as useful or valuable as past ISAs.  And now back to grading season.

Posted by Steve Saideman at 5:07 PM