My last update focused on getting vaccinated, woot!  After writing that, well, I started to feel chills, so I made heaps of references to Grease and its conclusion.  With the crisis deepening in Ontario, they moved the age down to 40, so we oldsters got in just before the rest of gen x.  And now I know which of my younger friends are just above or just below 40.  I am sorry that there is still a significant wait for many of them.  I expect things to shake out better in May as Canada is roughly a month behind the US, and the US has moved from not having enough shots and distribution to not having enough arms. 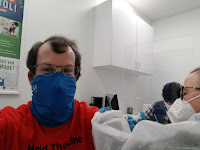 The chills and resulting sleeplessness lasted the weekend, although I managed to finish my US taxes and do some spring cleaning.  Good thing it ended by Monday, as I had the second CDSN COVID Response conference.  Last year, we got questions at the beginning of the Canadian crisis from the Department of National Defence, we brought together the community of defence and security experts, and tried to answer them, crafting a two page briefing note.  This year, we did the same thing but involved additional government agencies--Global Affairs Canada and the Canadian Security Intelligence Service.  We have drafted another memo, but I am awaiting some feedback and then translation before distributing/disseminating.  The event went well, although it was smaller than last year.  So, we addressed four questions rather than five.  I will blog about it next week.

The other event of the weekend was a cooking lesson organized by one of my sisters--dim sum.  This was part of Mom-fest as my mother turned 89 recently.  We all (ok, the next gen was a mix) bought ingredients and did some prep work (ok, the next gen was a mix) and then followed the instructions via a zoom with an instructor.  Some dishes worked better than others--it definitely improved my blanching skills.  I tend to avoid frying (I hate the mess), so I got some frying experience.  It was a change of pace from the weekly zoom with my family.  Later in the week, my mother had an unplanned hospital visit, but she is doing better and at home now.  The timing was good, if it ever is, as my sister was still at her place when she needed help.  The border stuff has meant I am not very helpful to my family, and I haven't seen my mother since January of 2020.  But having two fully vaxxed sisters able to help my mother is a huge relief.

This phase of the pandemic seems to be the most frustrating as we have real policy choices and much knowledge, but these are not being deployed well.  In Canada, the premiers (governors) of right-wing persuasion seem determined to screw this up, closely slowly and badly and not helping those who have to work.  In the US, Biden is sitting on a shit ton of AZ that isn't being used in the US--that along with ventilators should be going to India since their crisis is extreme.

On the bright side, the semester is nearly over, as I have completed nearly all of my MA grading, having just one of those papers, a boodle of dissertation proposals, and a few co-op reports left to read.  The long Canadian academic summer is just about to start, although it will not be interrupted by travel, alas.  Will I be superproductive?  Probably not, as I keep having a short attention span, responding to my twitter like the dog in Up.  But it will be a change of pace, and that is something I have always appreciated about the academic life--nothing stays the same for very long.

One of the consequences of the vaccination is that I have started looking forward--I should be fully vaxxed by the time Steve-fest rolls around.  The question will be--how comfortable will Mrs. Spew be with restaurants, theaters, and the usually stuff that comes with Stevefest.  I am determined to have a bbq with friends where I get to show off my new grilling recipes and my baking accomplishments--the timing will depend on when everyone gets their second shots.  And, yes, there will be pics when it happens.

I hope y'all are starting to figure out the first things you will be doing as we finally can move about the cabin.

Posted by Steve Saideman at 9:47 AM