Tis tax season, which is why this post is going up Sunday, not Saturday, as I spent yesterday collecting the info for doing a heap of taxes--two countries plus a random state plus helping Adulting Spew.

The semester is not quite over yet, but it is close.  Grading season is already here as two students submitted their Masters Research Projects to me this week.  Once I get those read, it will be grading time for my civ-mil class.  I can't complain much as our classes end earlier than those of my friends down south.  Speaking of classes, Carleton is shifting towards in-person in the fall.  We shall see how that develops as it is not clear it will be safe for students to gather even if the profs are vaxxed by then.

The story up here was, of course, the late and inadequate response to the spiking variants.  Doug Ford said dumb stuff about AstraZeneca after the national vaccine authority fucked up the math and got too risk adverse.  So, yeah, Canada is not a paragon of health policy.  We never could be New Zealand or Australia, but, damn, they could have done far better.  On this, Canadian federalism is definitely worse than American federalism.  I don't want to apply Green Lantern Theory to Trudeau, but I do wish he pushed harder and put some of these premiers into tougher spots.  But Ontarians still love Doug Ford so maybe JT was right to dodge that fight.  All I know is that Canadians are going to die unnecessary this spring. 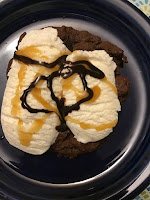 It has been a year since I got a play station, and I have realized that I should have gotten the stand mixer instead way back then rather than this January.  The totally chocolate chocolate chip cookies worked out nicely and are even better with ice cream.  The Detroit-style pizza last weekend was good but too saucy.  Oh, and the Dutch baby was delightful.  So, yeah, more baking, more eating, more treadmilling, and back to biking to get through this.

That's all I have for right now as I have to make some progress on the taxes.  We have time since CA is not due until the end of April and US has been pushed to mid-May.  However, I do like to get them done.  Probably next weekend.

The highlight ahead is the ISA this week.  Won't be the same at all--no Vegas, no hanging out, no meeting new people at civ-mil hangouts in bars, and very little of that camaraderie that energizes me.  Damn.  But my friends are getting vaxxed, and I am still dodging the virus.

Be well and get outside into the sun, if you can.

Posted by Steve Saideman at 2:03 PM