Canada has been shaken by the discovery of a mass grave for 215 Indigenous kids at a residential school.  Children from Indigenous families were taken away from their communities and forced to go these schools that were designed to remove their identities and make them as white and as Christian (Catholic, either mostly or entirely, I have not read enough to be sure) as possible.  The conditions at these places caused tuberculosis, pneumonia, and other diseases to thrive, not unlike concentration camps I have toured in Germany, and priests and nuns and others abused the children.

As an immigrant, I did not have the opportunity to be failed by Canadian schools (my Canadian friends report not getting much info about this stuff when they went to school).  Instead, I learned only a smidge as this stuff was referred to in the citizenship guide we read to prepare for the test: 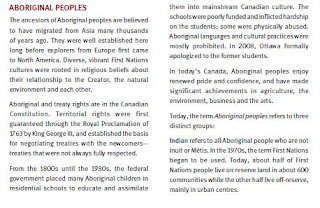 This text understates the harm as the National Truth and Reconciliation Commission estimated that 4,000 children died at these schools--a far higher rate than kids in the rest of the population--and a number that many see as an underestimate.  What always gets me is that these policies and schools continued into the 1990s.  Well, that's not fair.  They continue to this day but in a different form.  Instead of residential schools akin to concentration camps, we have kids taken away from their families due to welfare policies where the parents are seen as unfit due to the scars and legacies of the past--that past oppression and persecution has lead to poverty and other poor conditions, so the state comes in and takes kids away.

The Commission had all kinds of recommendations including spending money on finding the rest of the mass graves.  It does appear that some of this has been funded, but it is not clear to me why so little progress has been made.

The US has a similar situation as the equivalent of re-education camps were set up in the US, they had high rates of death and disease and accidents.  I don't know if this stuff is covered in the Native American museum in Washington, DC, as my visit there was cut short.  Each year (except during pandemics), my daughter and I visit a few Smithsonian museums on the Mall in DC.  Three years ago, we went to the Native American History Museum, but we didn't stay long.  My daughter was really uncomfortable with the government that continues to persecute Native Americans curating a museum about them.  There were displays that were critical of the Trail of Tears and about Standing Rock, but I don't remember anything about the damage done to the kids.

Anyhow, because I didn't know that much about the Canadian experience, I felt a bit more comfortable with genocide being used to describe what the US did to Native Americans than what Canada did to the First Nations.  The more I learn, the more I realize that the word fits only too well.  Much more needs to be done to recognize what happened, to compensate for the damage, and to improve the policies and the realities that the Indigenous people of Canada face.

Posted by Steve Saideman at 9:40 AM