Ontario is loosening up.  Woot?  Um, not so woot.  Long lines yesterday at clothing stores which have been closed for a few months, the full extent of Costco is now open, and, yes, patios at restaurants.  It is not enough and too much.  It is not enough because the schools remain closed, and the kids could really use just a few weeks of hanging out together.  It is not enough for me because ultimate frisbee can only start in phase 2 in three weeks even though we know that outdoor stuff is really safe.  It is too much in that people are going to let their guards down even as there are variants that are pretty harmful to those who have only had one shot.  Ottawa and Ontario are at about 70% for one shot but only 10% for two.  That latter number will accelerate, but we aren't there yet.

My basic approach is to be pessimistic in the short run and optimistic in the long run.  I am not confident that Canada will change the travel restrictions soon.  Indeed, last night, I had an epiphany--that there was no way they would change the restrictions until after Trudeau comes back from the G7.  This government cares mostly about optics (except when it comes to having a defence minister who does not know what the job entails) so they would not want to reduce the restrictions at a time where it would make things very easy for PMJT to come back.  So, the "logic" of early July makes more sense in that context.  That and Doug Ford blaming foreigners for his own failed responses makes the Liberals more cautious.

In a mostly meeting-less week (not a trend, alas), we made much progress on planning a series of CDSN events.  The summer institute's speaker lineup is nearly complete, the Year Ahead in December is getting there, our 9-11 event is 2/3s set, and we have started to go through the many applications for a new Project Coordinator.  I am taking my time on this hire, as I have learned that rushing it does not work out so well.  We have one podcast to record this week before we take a pause.  Our wonderful podcast producer, Melissa Jennings, is traveling and could use a break.  So, after the upcoming week, the next #BattleRhythm will be around Bastille Day, which is actually when I am slated for my next shot.

The baking continues.  I mentioned the s'more brownies I was going to make last weekend.  They were as gooey and as tasty as I had hoped for.  I distributed to our neighbors as I didn't want to cause Mrs. Spew and I to go into sugar shock. The next recipes?  Not sure, but the pressure is on as my family has informed me that I will be cooking and baking at least one night of the Saideman reunion in August.  I am going to have to figure out what worked best over the past year .... that is besides chocolate chip cookie dough pots which are, of course, required. 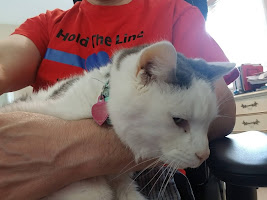 The story at home of late is the aging of Bob.  My daughter insisted long ago that she wanted a cat, and so we got Bob from a shelter.  He turned out to be less cuddly than we hoped, the kind of cat who would take a good petting session and turn it into a good practice first aid session.  In the past few years, he has slowed down.  During the pandemic, he has gotten positively cuddly.  He now limps around the house as his back legs and back bother him.  So, we have moved from mutual suspicion and distrust to detente to pandemic pals.  I have never been a cat person and am a bit allergic (but my daughter suggesting at age 6 or 7 that we get divorced so she could have one house with mom and a cat and another with dad and the dogs causes me to drop the objection).  So, he now insists on being picked up and put on my lap a couple of times a day to hang out for a while, making it hard to type.  But since I regret not spending enough time in the latter days of the lives of dog 1 and dog 2, I figure I can do this for Bob.  We are nearing the stage where we have to start weighing how much pain he is in versus how much he still has a decent life.  We have been through this before, but it does not get easier. 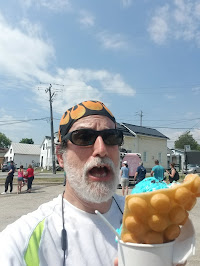 I will finish on a silly note.  The good news is that I am biking farther and farther, getting more exercise as the weather has been mostly terrific. The bad news that the southern end of my route has both a donut shop and an ice cream truck.  Last week, I had to try the bubble waffle cone.  Well, it was more waffle than cone as you can see.  I also ordered the cookie monster ice cream for complete decadence.  Because the only way through this pandemic is to grab and hold onto (and eat) the sweetest stuff one can find.  Even if it offsets the benefits of the bike ride.

Good luck finding the sweet stuff while we make our way through the next phases of this thing.