Got the Game Right, Everything Else Not So Much

I didn't blog it, but I was thinking the Packers would win because of their impressive wins on turf.  If I had known the turf would actually be more of a slip and slide [the broadcasters never commented on that!], I might have had second thoughts.

But I was wrong, wrong, wrong about the Canadian feed: there was not a single Canadian Tire commercial [glad I didn't find a bookie to take that bet] and the timing was not bad, so the transition from commercial to game was pretty seamless.  On the other hand, I was spot-on about the Canadian feed showing old ads and showing all of the ads again and again.  I think Dairy Queen and TD Bank set the record.  The oldest ad might have been the Canadian Forces recruitment ad focusing on saving folks in an arctic plane crash, proving that the CF follows the polls.  We did eventually get some of the US ads, mostly in the third and fourth quarter--Thor, Captain America, and a few others.

I would have minded the Fox shot of Bush and Condi (what a way to suck the fun out of the game), but Cameron Diaz feeding A-Rod some popcorn (or whatever) more than made up for it: 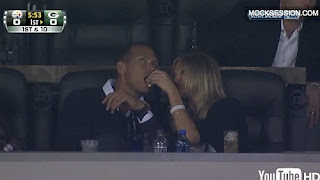 The other strangeness is that my satellite feed was not Montreal based, I think, as we had ads for Ontario and for Ottawa-based businesses.  So, so much for maxing the revenues of the local station.


I have been following sports betting more the past year thanks to Bill Simmons and Chad Millman at ESPN, so I guessed right that the game was a disaster for Vegas--the Packers won and the game went over the over/under on total points.  Not only that, but there was a completed 2 pointer, which folks tend to bet on.  I look forward to the next Millman podcast to hear about this. I didn't put any money on the game or any of the prop bets.  I keep my gambling limited to my career, my driving, and, well, cards.

The game itself was pretty enjoyable as it had big momentum shifts, great plays, a surprisingly lively and relevant crowd, and an outcome that was still in doubt with a minute left.  Too bad we didn't get the stories on TV of mistakes made by the stadium folk--not enough seats!
Posted by Steve Saideman at 7:09 AM