Where is Norma Rae When We Need Her?

The union-busting in Wisconsin confuses me.  Not because the GOP wouldn't love to destroy what is left of the American union movement--that I expect.  No, it is that I am coming full circle on unions.  I grew up with a Liberal (American liberal, not Canadian liberal) mother who shaped my thinking about unions.  It was a time where the history classes in high school focused on the roles unions played in humanizing the workplace after the era of child labor and all the rest.

Yet I have always had a bit of bitterness towards unions, as my first taste was the teachers' union.  My junior year of high school essentially took place two weeks later than it should have due to a strike by the teachers.  This meant that my last summer at camp, the one where I would be a counselor-in-training with all of the responsibility and fun attached, started late for me.  So, I lost 25% of what was supposed to be one of the best summers of my life.

After that, I had little experience with unions until I came to Canada.  Here in Montreal, unions are powerful actors and they rely on old school coercion to make their points.  The cable tv union was on strike when we arrived, and the workers were famously cutting the cables to express their displeasure (so we have a satellite dish instead).  The city workers were on strike, so the parks were getting overgrown.  Parents tried to move the fields themselves so that their kids could play, but then they were intimidated by the workers.  The firefighters painted their trucks and put stickers all over them about political issues. So, I started developing a nasty attitude towards unions.

And then my teaching assistants struck during finals.  Of course they would.  It was the time at which their leverage was the greatest.  I am not a big fan of this union and not just because that one semester became pretty challenging.  Every time I have TAs, I must fill out a form allocating the hours that they will work. This is to protect them from being abused, and I get that.  The problem is that the social sciences tend not to abuse their TAs like the sciences, but we all have to live within a system that creates perverse incentives (assign less writing for the undergrads so that we do not exceed the TA's hours) and fosters lies (how long does it take to grade an exam?).

McGill's professors are not unionized, for which I am ever thankful, given what I have heard about the other universities around here that are.  There is a union at McGill, but salaries are not fixed to a grid to make sure the mediocre do as well as those who are productive.  Funny how the mediocre are big fans of the union, though.

So, I have been joking for years that Quebec is turning me into a Republican because I have become anti-union and anti-tax.  But then the Wisconsin governor, Scott Walker, reminds me why unions exist in the first place--to protect workers from capricious employers.  I get upset at unions that seem to be overly entitled (name your average union in Quebec), but the case in Wisconsin and now elsewhere is more than just about efficiency and cost savings.  Indeed, as this chart shows, there is little correlation with unionized state workers in the US and deficits: 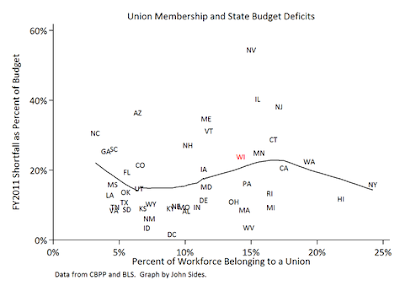 Indeed, the interviews with the Scott Walker, as clipped by Jon Stewart and the Daily Show, demonstrate this is much more about union busting that cost cutting.  Given that the rest of the financial package seems to involve benefits to rich folks (the Koch brothers yet again?) and a refusal to raise taxes, when it is clear that the deficits problem come from too little revenues, I find it hard to have anything but empathy for the unions, even the hated teachers unions.

What the pro-business folks forget is that the market (hee, hee) not only creates incentives for the development of the firm, but also incentives for workers to organize.  It drives me crazy that the mad, delusional libertarians (unlike the semi-reasonable ones) seem to believe that the market works without regulation when they actually like having regulations and government decisions that facilitate businesses at the expense of everyone else.  Such as selling off assets of the state without bidding.  Oh wait, would bidding be a market process?  Damn.  How inconvenient.  It is kind of like the bible or Clausewitz or the Constitution--people focus on the parts they like and forget the rest.  Market capitalism requires competition in the marketplace to work, yet the folks who seem to be behind much of the anti-regulation fever really do not want competition--they want monopoly, preferential access, and protection.  For themselves, but not for anyone else.

So, I have come full circle--I am a big fan of capitalism (as the alternatives suck bigtime), but make mine a well-regulated capitalism, where government works to make sure the system functions and that there are safety nets for those that capitalism would ignore or damage.  And one of those aspects that helps make the system work happen to be organizations that represent workers, just as there are organizations that represent capital.  Yes, unions can be too strong, too entitled and cause tremendous dysfunction, but American unions are simply not in the same ballpark as those in Quebec.  Pretending that they are is just silly, and we can see that the American people via the polls and the Republicans as they run away from Walker, that the pretense is not going to carry very far.
Posted by Steve Saideman at 8:33 AM

Email ThisBlogThis!Share to TwitterShare to FacebookShare to Pinterest
Labels: economy, US politics