Just one glance at the political science job rumors website is enough to demonstrate that we have heavily invested our egos in this business.  It is not just aspiring grad students facing a difficult job market.*  All of the ranting and raving about rankings of programs and which programs should be trashed next are in large party about self-esteem and egos.  Donald Horowitz's application of social psychology--the logic of invidious comparisons--applies to more than just ethnic conflict.  So, when I see something like this: 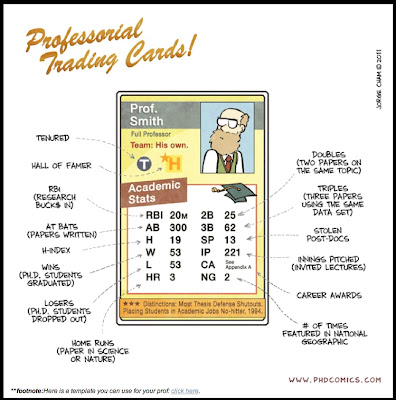 I cannot help but think about what my stats are and how my card would look.  Of course, some of this would not apply or would have to be significantly revised, such as nature, science and National Geographic.  For the time being, I am not going to fill in my own card, as it would take too long.  I do know that I would have zero stolen post-docs and no career awards thus far.  On the other hand, my winning percentage for grad students would be very good--I have only lost one potential PhD student because he needed to get more high tech training than we could provide.  And my placement record for my PhD students thus far is quite good.

In an age of improved sports statistics thanks to the sabermetricians and their equivalents, we could consider new and different statistics, either in addition to or in lieu of the ones on the card.  H-Index is a fancier way to measure citations (check out the software publish or perish).  A baseball card for profs might include both, just as the new ones include not just batting average but OPS (combination of on base % and slugging %).  I would add number of co-authors (mine would be sixteen if one includes papers that have been presented but not published).  Datasets created?  Job offers?  Course evaluation average?  Reviews for journals/presses/grant agencies?  What stats would you recommend for a  prof's card?

A different way to measure an athlete is not their card but their value to a fantasy team.  A couple of political scientists were way ahead of the curve by making up the rules for rotisserie political science.  The rules are very focused on Americanists, given the points given for particular journals.  Notice no discounting for co-authoring.  My favorite rule is the Kathy Kemp Rule: 65 points if you send a paper a birthday card for being under review for a year.  I have only had that happen once (the paper was rejected eventually, but two subsequent pieces have been published at that journal).  My favorite category is attendance--points for attending panels other than one's own.  I used to get heaps of points here, but a precipitous decline as of late.  I do like the loss of points for saying something serious at a conference business meeting.  Minus 17 points for being named Dean!  I am thinking of a new category--number of people who mistakenly think I have reviewed and rejected several of their articles.  Right now, I am at 2 for that category--that I know of.

*  Of course, that one phrase scares me just a bit.  One of the explanations for why so many terrorists from the Middle East are engineers--frustrated career ambitions.  The good news is that poli sci students would probably make lousy terrorists--they would find the lit reviews really hard to complete before moving on to the violence phase.
Posted by Steve Saideman at 11:46 PM