An End to an Ultimate Era

Last night was my last game in a Montreal ultimate league.  I played in essentially three leagues in my time in Montreal: the Montreal Ultimate Association's [AUM] city-wide league; Concordia University's "intramural" league; and last summer's brand new West Island league (which is run by the AUM).  I have had a great time in each.  The AUM was my first experience with an indoor league where I got to meet my first Montreal ultimate folks.  I then went on to play on Tuesday and Thursday evenings for all of my summers in Montreal except last year on a variety of teams including Ultimate Angels, Hard, Sexy Mother Huckers, and a couple of others whose names elude me.   Last summer, I replaced my bi-weekly treks across town and over bridges to play in the new league much closer to home.  I mentored a bunch of folks new to competitive ultimate.

On Sundays for the past five or six years including the last several winters, I played on Sundays with General Admission, my absolute favorite team.  While the players have changed on that team, the folks have always been of great skill and spirit.  They tolerate and even welcome my hucks (long throws) and encourage me to dive or lay out for a throw.

I had so much fun over the years here.  I met so many people, Anglophones, Francophones, Allophones, silly people and not so silly people (ok, damned few of those), Montrealers, Quebeckers, Albertans, Americans, etc, younger folks (like my daughter's teammates) to older folks (giving me hope that I might play into my 60's--which, according to one teammate, would be next year).  It has just been a great ride, with many of my favorite Montreal memories being ones involved with games and tourneys, with throws, defenses, catches and all the rest.  Such a great community of players here.

So, it was a great ending to my ultimate time here that General Admission won its bracket (B, this time, instead of the A division) last night.  My teammates kept trying to throw the disk to spots where I would have to dive, with only one succeeding--for a score.  Hence this pic: 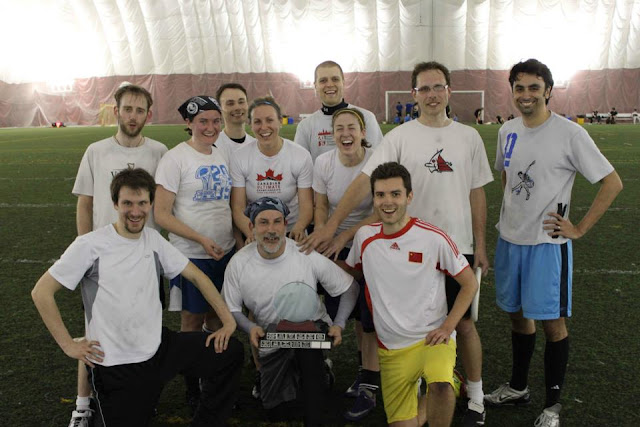 Thanks for the cheers, the throws and the catches, and thanks for making up for my lousy defense.
Posted by Steve Saideman at 11:27 AM