I have often criticized the NDP for pandering to the Quebec nationalists by taking weenie positions on a possible Quebec referendum.  Well, the Immigration Minister of Canada, Jason Kenney, has out-pandered the NDP.

In a press conference with Tamil-Canadian media last month, Citizenship and Immigration Minister Jason Kenney said Canada acted against its own interests by listing the Liberation Tigers of Tamil Eelam (LTTE) as a terrorist group in 2006.

Acted against the interests perhaps of Canadian politicians seeking the Tamil-Canadian vote, but Canada had stood out as one of the few advanced democracies not recognizing the reality that the LTTE were a terrorist group.  Of course, perhaps we should have given the LTTE a pass because it only perfected the art of suicide bombing including the use of apparently pregnant women.  Perhaps we should give the LTTE a pass because it was more equal opportunity for women than many other terrorist groups?

Of course, this was a session only for Tamil-Canadian media so it took a month to get out.  If this was not pandering, Kenney should have said it widely and loudly.  So, the media here really is the message--talk to an ethnic lobby in a way that you cannot say publicly.  Good times.

Yes, the Sinhalese majority of Sri Lanka have abused the Tamils in many ways--providing the textbook case of ethnic outbidding--where two parties compete for a majority's vote at the expense of a minority.  But in 2006, the LTTE were still alive and kicking and causing much in the way of civilian casualties.

To be clear, the Tamil-Canadians are not the only community that has supported those using violence in the homeland and where local politicians have pandered to them (Irish-Americans are a famous case).  I expect (in books 1 and 2) for people to seek policies that aid their kin back home.  I also expect politicians who need their votes to support their positions.  But I don't have to approve of it. So, excuse me if I call a pander a pander, but Kenney is the new pander bear of Canada.*


* As this picture suggests, I am not the only person to think of the phrase "pander bear" 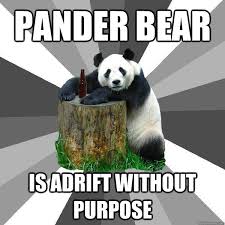 Posted by Steve Saideman at 9:53 AM