I got a comment on my post about Germany's drones that referred to the problems resulting from Germany given responsibility for police training.  NATO not only divvied up the country into different areas of operation with the Germans getting the north, Italians getting the west, the Canadians/Brits/Dutch sharing the south and the Americans leading in the East, but they also had functional division of responsibilities as well.  The Germans got policing, the British got counter-narcotics, and the Italians got judicial reform.  Yeah, incredibly problematic and more than just a bit funny, that last one.

Anyway, the Germans were poorly suited to do police training for several reasons, but particularly because of two key restrictions: their army and police were not allowed to cooperate much due to historical stuff, and German troops faced geographic restrictions as well.  So, other than training in Kabul, the training could otherwise only take place on German bases in RC-North (I could be slightly wrong on this, but I am basing this on interviews with Germany Interior Ministry folks as well as others who experienced/observed some of this).

Eventually, the US took over and poured a heap of resources into this.  But it led to a set of perceptions that I don't think were accurate.  That police training was just a few years behind training the Afghan National Army, illustrated thusly:*


* I hereby demonstrate why I did not major in graphic arts 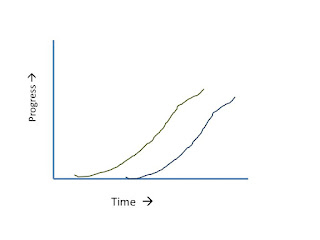 The green line on the left is ANA training, the blue line on the right is ANP.  The basic idea is that both training efforts have the same trajectory.  The problem with this is that training police may be fundamentally and inherently more difficult than army training.  Police need to do a wide variety of tasks, they need to be deeply engaged with local populations, they face constant temptation to exploit those that they should be protecting and serving, and so on.  While being a member of an army unit also has its own challenges, most enlisted troops have fewer skills to master, local knowledge and engagement is less important (again, for the enlisted folks), and so on.  So, I would expect the comparison to look more like this: 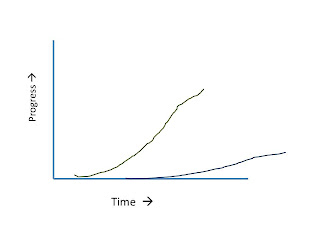