Heat vs. Light: Iraq in the Rear View Mirror

I have not had much time to blog or tweet during APSA, as the conference has kept me busy.  I have enjoyed chatting with former students, past colleagues, co-authors, and other folks I have networked over the years.

Tonight, I attended a panel I helped organized.  It was a plenary session--meaning big room in a special time slot with John Mearsheimer, Juan Cole, Linda Blimes, and Peter Feaver discussing the big Iraq decision ten years ago.  I live tweeted so here is the storify containing my tweets and some interactions.

Mearsheimer was rehashing stuff he has said before about how the marketplace of ideas was squelched by the Bush Administration and its allies.  I don't think it was squelched, as many academics (not just realists) thought and said the invasion was a bad idea.  My feeling was and is that academics said a lot of stuff and were allowed to say so, but that there was no audience willing to listen and heed their sage advice.  Mearsheimer also took some early shots at Feaver, who responded in kind (and got the better of the exchange in my humble opinion).

Peter Feaver, who worked in the Bush administration after the bad decisions of 2003-04, argued that the big communication problem is not the marketplace of ideas in the public in 2003, but the noisy consensus among academics who are falling for myths and not really doing the necessary work to understand the decade.  The problem with seeking a "balance" in the academic work on Iraq is there were so many incredibly poor decisions, where there is no upside--such as disbanding the Iraq army.

Juan Cole had the presentation that most resonated with me as it confirmed my biases--that the problem was not the marketplace of ideas but of policy.  That the folks who would say that Iraq was hard were shut out of the process, that those who had better ideas of how to do it beter were left out of the policy process.

Linda Blimes was the one that presented information that I did not know before--that the costs for the war are bigger than I thought--$4 trillion.  The bad accounting has huge consequences, that the peak year for WWI veterans' payments/costs was 1969 or so, for WWII it was 1976 or so, and so the costs for Iraq and Afghanistan are very much in the future.

So, more heat than light, but it was interesting.  Plus my partner in crime, Idean, got a key to the Conrad Hilton suite: 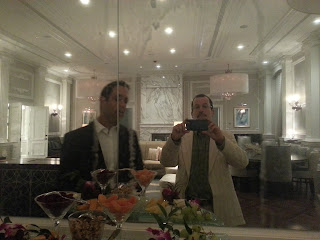